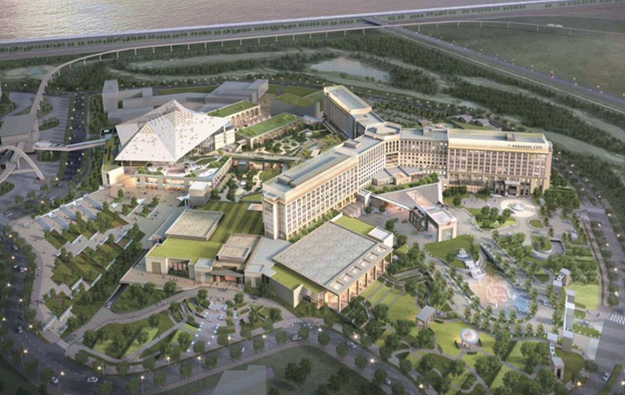 Paradise Co Ltd forecasts its newest casino resort in South Korea – Paradise City, which opened on Thursday – will receive about 1.5 million visitors in 2017.

The information – quoted by South Korea’s Yonhap news agency – was provided in a media briefing on Thursday.

Reuters news agency said in a Tuesday report that the number of Chinese visitors to South Korea fell 39 percent year-on-year in March. The Korea Tourism Organization had previously announced that – respectively in January and February – the tally of such visitors had risen by 8 percent from a year earlier.

“Tensions over THAAD will not be eased in the short term,” Paradise Co’s chairman and chief executive, Chun Phil-Lip, said during Thursday’s briefing on the new resort, as quoted by the Nikkei Asian Review. “We are approaching this matter with a conservative perspective.”

Mr Chun said: “We have been heavily relying on China but we will [develop] new markets.” He added: “Now we keep our eyes on Japan and Southeast Asian countries, such as Vietnam, Thailand, Indonesia, Malaysia and Hong Kong.”

The Paradise Co management expects Paradise City (pictured in an artist’s rendering) to help boost the firm’s performance: the company is forecasting a 26.6 percent year-on-year jump in revenue for full 2017 to KRW880 billion (US$773.8 million).

The Paradise City casino resort is located at Incheon and includes a gaming facility open only to foreigners. The property is located close to Incheon International Airport, which serves as the main air hub for the country’s capital Seoul.

The initial phase of Paradise City – launched on Thursday – consists of a casino, a hotel and a conference-cum-banquet facility. The project is being developed by South Korea’s Paradise Co – an operator of foreigner-only casinos in that country – and Tokyo-based Japanese pachinko operator Sega Sammy Holdings Inc.

A second phase – to open in the first half of 2018 – will add further entertainment and leisure offerings to the complex, and a boutique hotel.

The total investment amount for the 330,000-square-metre (3.58 million-sq-foot) site stands at around KRW1.3 trillion, according to the promoters.

Paradise Co now operates six foreigner-only casinos in South Korea, including another existing property at Incheon. The country has now 18 casinos but only one – Kangwon Land in a remote upland area – is allowed to serve South Korean nationals.

South Korea’s Jeju Island has recently also attracted a lot of new gaming-related investment. The semi-autonomous province is already home to a number of casinos, all for foreigners only.

A Macau court was offered evidence on Monday, including of recordings from police-wiretapped telephone conversation, that the prosecution says proves the direct involvement of Levo Chan Weng Lin... END_OF_DOCUMENT_TOKEN_TO_BE_REPLACED