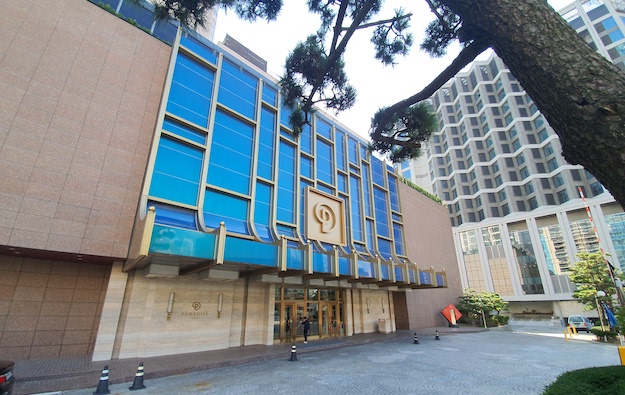 Two of South Korea’s foreigner-only casino operators reported mixed fortunes in October, at a time of easing of Covid-19 restrictions in the country.

Paradise Co Ltd saw its casino revenue in October increase by 125.1 percent month-on-month, to KRW21.35 billion (US$18.1 million). Last month’s tally was down 4.5 percent from the prior-year period, said the company in a Wednesday filing

The figures are based on the casino-business division comprising Paradise Walkerhill, in South Korea’s capital Seoul; Jeju Grand on Jeju island; Paradise City at Incheon outside Seoul; and Busan Casino (pictured in file photo) in the southern port city of the same name.

Also on Wednesday, Grand Korea Leisure Co Ltd, reported casino sales of just above KRW9.27 billion in October, down 1.5 percent month-on-month. Judged year-on-year, such sales declined by 16.5 percent from a year ago.

Grand Korea Leisure’s table game sales for October this year were KRW7.67 billion, down 3.2 percent from September. The figure was also down 16.2 percent in year-on-year terms.

Machine game sales for last month were just above KRW1.60 billion, up 7.2 percent sequentially, but down 17.8 percent from the prior-year period.

Korea Exchange-listed Grand Korea Leisure is a subsidiary of the Korea Tourism Organization, which in turn is affiliated to South Korea’s Ministry of Culture, Sports and Tourism.

The authorities in South Korea eased a number of restrictions for several businesses from Monday, citing plans to drop most domestic restrictions by early 2022.

Macau’s health authorities said on Sunday that they would require all people wishing to enter the city’s casinos not only to have their body temperature measured and to display a... END_OF_DOCUMENT_TOKEN_TO_BE_REPLACED