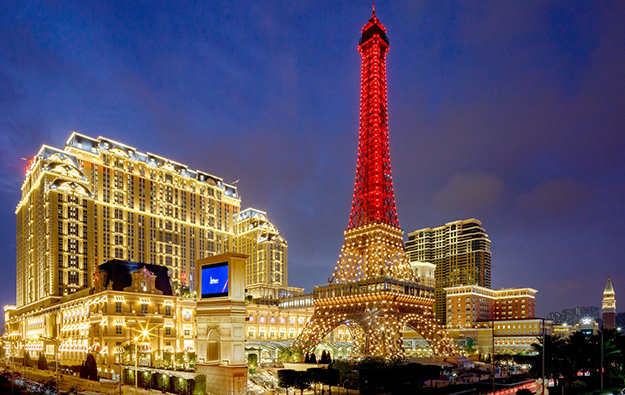 The Parisian Macao, the latest Macau gaming and entertainment resort from Sands China Ltd, opens to the public today (September 13).

The opening celebrations for the US$2.7-billion project will include fireworks, a light show at the destination’s half-scale replica of Paris’s famous Eiffel Tower landmark, and performances by Belgian soul singer Lara Fabian, and Hong Kong singer and actor Karen Mok Man Wai.

The casino resort is positioned to attract middle-class and family customers by offering an “affordable luxury experience”, said Sands China’s president Wilfred Wong Ying Wai in comments to local media in the week prior to the launch.

Since the Parisian Macao concept was first announced by Sands China’s parent Las Vegas Sands Corp in 2012, the structure of the Macau gaming market has changed, with revenues of the traditional backbone – VIP gaming – softening for two years straight, while the mass-market has recently made gains.

Nonetheless, the Parisian Macao – unlike its Cotai next-door neighbour Studio City, promoted by Melco Crown Entertainment Ltd – will have VIP gambling from the beginning.

Mr Wong confirmed last week that of the 410 gaming tables at the Parisian Macao when it opens, a total of 49 would be for VIP gambling. He also stated there would be three VIP gaming rooms at the casino resort, including a VIP play facility directly managed by the company.

A total of 310 of the 450 live gaming tables that are available at the Parisian Macao from the opening day have been transferred from other Macau properties of the company.

All the new-to-market tables for the Parisian Macao are earmarked for the mass-market segment, the government said.

The property was additionally authorised to install 1,600 new slot machines on its casino floor.

The Parisian Macao adds 3,000 hotel rooms and suites to the local market, as well as meeting space, shops, and a themed water park, according to Sands China.

The opening comes at a time of mixed messages from investment analysts regarding the Macau market. Last week Deutsche Bank AG said in a note that Macau was “at the start of a mass-led GGR [gross gaming revenue] recovery”.

But on September 5, analysts at Japanese brokerage Nomura said Macau market data pointed to declining hotel room rates; declining average spend from overnight visitors; and “disappointing” returns on invested capital of 3 percent to 4 percent for Studio City which opened on October 27 last year, and for Galaxy [Macau] Phase 2, a scheme from Galaxy Entertainment Group Ltd, which opened on May 27 last year.

The launch of the Parisian Macao comes only weeks after the opening of the US$4.2-billion Wynn Palace, promoted by Wynn Macau Ltd, prompting some analysts to fret about the risk of oversupply in the current market.

Nonetheless, Christopher Jones, an analyst at the Buckingham Research Group said in a Monday note: “We are encouraged by the momentum in the market for September and believe that the opening of the Parisian… can only add to this momentum.”

The imminent return of package tours from mainland China will not only help boost Macau’s tourism businesses, but is also expected to help casinos gain more foot traffic in their mass gaming... END_OF_DOCUMENT_TOKEN_TO_BE_REPLACED