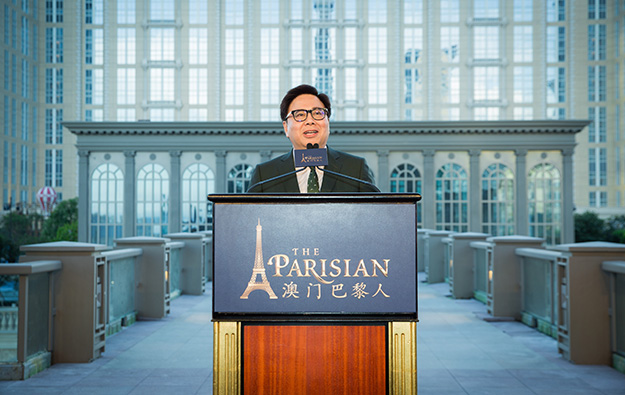 The bulk of the tables – 310 in total – will be from other Macau properties run by the company. The balance, amounting to 100 tables, are the new-to-market ones – for the mass segment-only – granted to the Parisian Macao by the city’s government for the property’s launch, Mr Wong said. The government is allowing the Cotai venue an additional 50 new-to-market mass-segment tables in two tranches on dates after the opening.

Of the 410 gaming tables at the Parisian Macao when it opens on September 13, a total of 49 will be for VIP gambling, the Sands China executive told the media outlet. He also stated there would be three VIP gaming rooms at the casino resort, including a VIP play facility directly managed by the company.

Junket operator Suncity Group – said by investment analysts to be one of the largest VIP gambling organisers in Macau – confirmed to GGRAsia in August that it would have VIP facilities at the Parisian Macao.

The property has additionally been authorised to install 1,600 new slot machines on its casino floor.

Mr Wong told Macao Daily News that there will be about 6,000 employees working at the casino resort, of whom 3,700 will be people transferred from other Sands China properties.

The casino resort is positioned to attract middle-class and family customers by offering an “affordable luxury experience”, Mr Wong told the newspaper.

According to information released by Sands China, the Parisian Macao will have approximately 3,000 guest rooms and suites; 170 shops; a 1,200-seat Parisian Theatre; and meeting space covering 5,200 square metres (56,000 sq feet). The property will also have an outdoor pool deck, with a themed water park called Aqua World.

The imminent return of package tours from mainland China will not only help boost Macau’s tourism businesses, but is also expected to help casinos gain more foot traffic in their mass gaming... END_OF_DOCUMENT_TOKEN_TO_BE_REPLACED