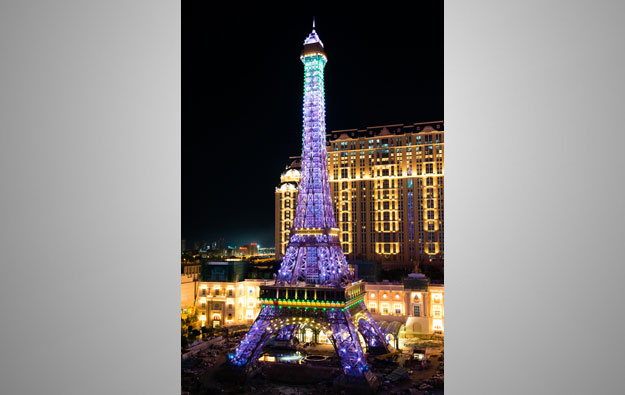 “…our chairman [Mr Sheldon Adelson] has already disclosed that it [the opening date] is one day in September. And we will not slip: we will adhere to [the] schedule,” said Mr Wong at an evening ceremony marking the illumination of the Parisian Macao’s half-scale replica of the Eiffel Tower (pictured).

A press release issued by the company following the event, stated that the opening of the new resort would be in “mid-September”. It did not specify whether that would be a partial or full opening of the property.

In an interview with Bloomberg in February, Mr Wong had mentioned that the Eiffel Tower at the US$2.7-billion Parisian Macao might open before September. The early opening of some facilities at the casino property would be part of a promotional push to draw tourists, the Sands China president said at the time.

According to information provided by Sands China, the Parisian Macao will have approximately 3,000 guestrooms and suites, more than 150 shops, a 1,200-seat Parisian Theatre and meeting space totalling 5,200 square metres (56,000 sq feet).

Several new Cotai projects have recently announced some slippage of their opening dates.

U.S.-based Wynn Resorts Ltd and its subsidiary Wynn Macau Ltd have yet to provide a date for when in the third quarter the under-construction Wynn Palace casino resort will open. The US$4.2-billion project was previously scheduled to open on June 25, after a plan to launch it on March 25 was dropped.

The opening of The 13 hotel, located on the Cotai-Coloane border, has been pushed back to the fourth quarter of 2016, from an earlier target of late summer 2016, the project’s promoter announced on June 15.

A note released from brokerage Sanford C. Bernstein Ltd on June 17 noted that there is a “possibility” that the opening of Macau casino resort MGM Cotai might “trickle into the second quarter” of 2017. The brokerage has cited comments by management made at an ‘Analyst and Investor Day’ held in Las Vegas, by MGM Resorts International, the parent investor in MGM Cotai.

Macau’s Legislative Assembly (pictured) will conduct on Monday (January 24), during a plenary session, a formal first reading of the draft bill to amend the city’s gaming law, according to a... END_OF_DOCUMENT_TOKEN_TO_BE_REPLACED