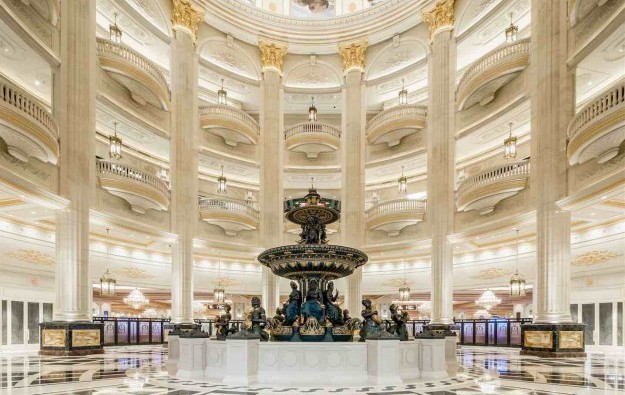 The head of the Macao Government Tourism Office (MGTO), Maria Helena de Senna Fernandes, said on Sunday that the fountains at casino resort Parisian Macao, developed and operated by Sands China Ltd, could reopen “in the short term”, once the property was considered free from abnormal levels of legionella bacteria by the city’s Health Bureau. A spokesperson from Sands China told GGRAsia that the fountains at the property had been closed since an inspection was conducted in April, but that the swimming pool area has been always in operation.

The Parisian Macao (pictured) had been linked by the Health Bureau to three confirmed cases of Legionanaire’s disease in late April.

The bureau confirmed in a May 13 statement that it had found “abnormal levels” of legionella bacteria in 10 out of 78 water samples collected in April at Parisian Macao. In the statement, the bureau noted that it had conducted a second inspection to fountains, jacuzzis and swimming pools at the Parisian Macao following a deep cleaning by Sands China. The bureau said at the time it had collected new water samples and was awaiting the results of the new analyses.

In the same statement, the Health Bureau said that it had also found in April anomalies in the operation of the chlorination system, as well as insufficient residual chlorine in the water system. But in the statement, the bureau said there was no legionella bacteria found in swimming pools, spa and fountains at Parisian Macao.

Following the Health Bureau’s inspection in April, operations at the Parisian Macao’s swimming pool area were suspended, so that the area could be cleaned and disinfected. The bureau also ordered deep cleaning of all jacuzzis and of the property’s pipe system, as well as the adoption of other precautionary measures.

“The [Parisian Macao] hotel has been complying with the requirements of the Health Bureau, and did a series of disinfection and cleaning works,” Ms Senna Fernandes told reporters on Sunday on the sidelines of a public event.

“We will continue to keep close contact with the Health Bureau and also with the hotel operator on this matter,” the MGTO head added.

GGRAsia asked the Health Bureau about the results of the second inspection it had conducted at the Parisian Macao. No reply had been received by the time this story went online.

A Macau court was offered evidence on Monday, including of recordings from police-wiretapped telephone conversation, that the prosecution says proves the direct involvement of Levo Chan Weng Lin... END_OF_DOCUMENT_TOKEN_TO_BE_REPLACED