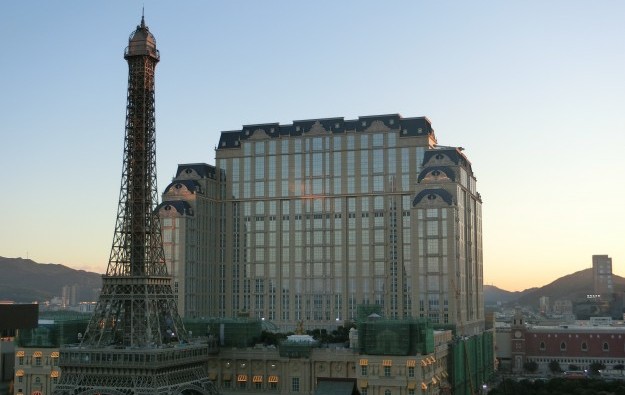 The US$2.7-billion Parisian Macao (pictured) is set to open in mid-September, according to Sands China. The company has not specified whether that would be a partial or full opening of the property.

In a note on Thursday, brokerage Union Gaming Securities Asia Ltd said it thought the Parisian would open in the third week of September.

“Sands China’s Parisian is likely to open around the third week of September as the company finalises all the necessary approvals,” wrote analyst Grant Govertsen.

“We have been very impressed what we’ve seen so far at the property – namely touching all the high points of a trip to Paris (from a photo opportunity perspective) including, of course, the Eiffel Tower, but also other notable landmarks like the Moulin Rouge,” he added.

Jornal Tribuna de Macau quoted Mr Wong saying that the company is still finalising the plans for the casino at the Parisian Macao. He did not disclose how many VIP rooms the casino would have.

But Melco Crown is now planning to open VIP facilities at Studio City, in what is seen by some investment analysts as a move to enhance the property’s financial and operating performance.

Junket operator Suncity Group confirmed to GGRAsia that the firm is in the process of establishing a VIP room at Studio City. Business news outlet Bloomberg had reported last week that Melco Crown was planning to add three VIP rooms at the property.

On Tuesday, Sands China’s Mr Wong declined to be drawn on specifics regarding the number of new-to-market tables the Parisian Macao is likely to have. Jornal Tribuna de Macau quoted Mr Wong saying that the decision on table allocation is up to the Macau government. “We don’t know [how many tables] we’ll have,” he reportedly said.

The Sands China president additionally stated that the Parisian Macao would need about 6,000 workers. Mr Wong was speaking on the sidelines of an inauguration ceremony of an initiative called Professionalism Training for Gaming Practitioners, a course organised for 600 Sands China workers.

Speaking on the sidelines of the same event, Macau’s Secretary for Economy and Finance, Lionel Leong Vai Tac, told reporters that there is still no application from Sands China on the number of new-to-market tables the company wants to install at the Parisian Macao.

“We haven’t received any documents [related to the Parisian Macao],” stated Mr Leong on Tuesday.

The imminent return of package tours from mainland China will not only help boost Macau’s tourism businesses, but is also expected to help casinos gain more foot traffic in their mass gaming... END_OF_DOCUMENT_TOKEN_TO_BE_REPLACED