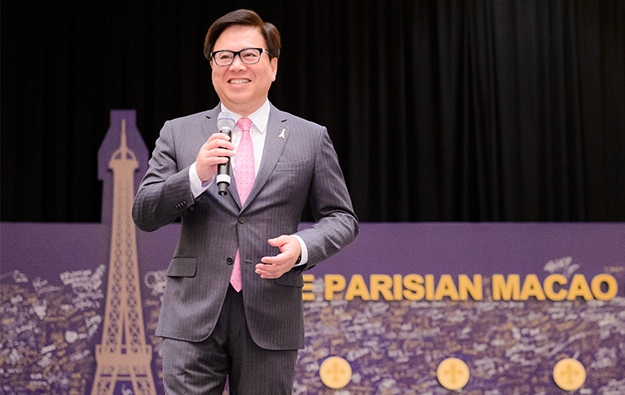 The opening of the Parisian Macao, the latest Macau casino resort from Sands China Ltd, will not generate business at the expense of the firm’s existing Macau properties. That was the view of Wilfred Wong Ying Wai, the company’s president and chief operating officer, in comments to the media on Thursday.

The new venue will instead stimulate new demand for Macau casino and tourism services, suggested Mr Wong, rejecting the so-called “cannibalisation” theory that has been offered by some investment analysts as new casinos open in the city at a time of moderating consumer demand.

“I don’t think so,” Mr Wong, referring to the idea there might be self-defeating competition between the Parisian Macao and group’s other venues: the Venetian Macao; the Plaza; Sands Cotai Central; and Sands Macao.

“Because we’ve done a series of promotions, particularly through social media – we have now got a very positive response,” Mr Wong told news organisations.

“…there’s a high degree of awareness [of Parisian Macao]; there is a lot of anticipation: people are booking [hotel] rooms for the month of September… we’ve seen very solid booking… these are new clients coming,” the executive stated. “Hopefully, new properties like the Parisian Macao are going to improve Macau as a destination; and I’m expecting this to create more visitation.”

The Parisian Macao will have 3,000 hotel rooms and suites, a casino, meeting space, shops, and a themed water park, according to Sands China.

Mr Wong was speaking to the media on the sidelines of a Thursday press briefing at the Parisian Macao regarding the resort’s opening events and promotions. The launch date of September 13 had been confirmed weeks ago, but Mr Wong on Thursday revealed the opening time for the public would be 8.18pm; numbers that when spoken in Cantonese sound like a phrase denoting good luck.

The debut of the Parisian Macao will feature fireworks, and a light show at the destination’s half-scale replica of Paris’s famous Eiffel Tower landmark, Mr Wong stated during the press briefing. Performances by, respectively, Belgian soul singer Lara Fabian, and Hong Kong singer and actor Karen Mok Man Wai, are also part of the festivities for the launch.

At the briefing, Mr Wong confirmed to the media that the new casino resort is to open with a total of 410 gaming tables; including 310 tables to be transferred from other Macau properties of the company.

All the new–to-market tables for the Parisian Macao are earmarked for the mass-market segment, the government had said.

“The government has its own considerations [regarding allocation of gaming tables],” Mr Wong remarked.

“Our stance is that we respect and understand the government position because there is a 3-percent control over the cap regarding annual growth,” he said.

The Macau government has a market-wide table cap designed to limit the growth in the number of live dealer gaming tables in the city to 3 percent compounded annually for a 10-year period up to December 2022.

Paulo Martins Chan, director of Macau’s casino regulator, the Gaming Inspection and Coordination Bureau, reiterated to media at the same Thursday event that the table cap would be in place until the end of 2022.

The gaming bureau’s boss added that his department had not so far received any applications for new-to-market gaming tables from the gaming resorts still under construction on Cotai and its surroundings.

MGM Cotai, from MGM China Holdings Ltd, is due to open in the second quarter next year. Grand Lisboa Palace, from SJM Holdings Ltd, might open in 2018, the latter firm’s chief executive said in August.

Philippine gaming investor Leisure and Resorts World Corp reported a net loss of nearly PHP222.4 million (US$4.2 million) in the first three months of 2022, up from PHP125.6 million a year earlier.... END_OF_DOCUMENT_TOKEN_TO_BE_REPLACED