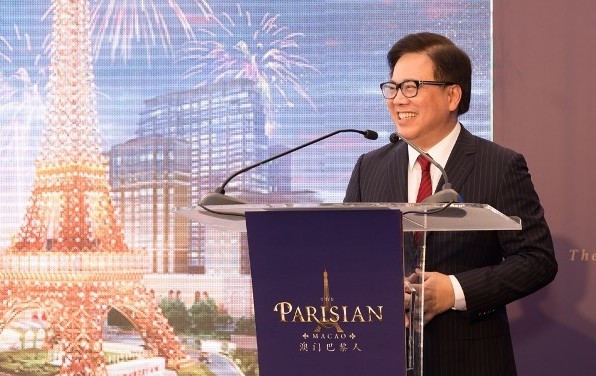 The half-size replica of the Eiffel Tower at the US$2.7-billion Parisian Macao might open before September, said the president and chief operating officer of Sands China Ltd, Wilfred Wong Ying Wai (pictured). The early opening of some facilities at the casino property would be part of a promotional push to draw tourists, Mr Wong told Bloomberg News in an interview.

The casino operator has been granted more time by the Macau government to complete the under construction Parisian Macao on Cotai. Under Sands China’s land concession for the scheme, the company was required to complete the development of the project by April 2016. Such deadline has now been extended to November.

On a conference call with investment analysts in January, Sands China’s chairman and chief executive Sheldon Adelson said the firm was targeting a September opening for the Parisian Macao, and potentially a partial opening in the summer “if the opportunity arises”.

Mr Adelson said in a statement on Friday to company shareholders that the Parisian Macao would follow on the success of sister property Venetian Macao.

“I am confident that the Parisian Macao will both replicate the success of the Venetian Macao as another themed, iconic and must-see integrated resort destination for Macau’s visitors, while expanding the overall business and leisure tourism appeal of Macau,” he said.

In the interview with Bloomberg, Mr Wong said Sands China “won’t complain” if it was allocated 250 new-to-market gaming tables for the Parisian Macao. The executive however said he hoped to be allowed to set up more tables, taking into account the project’s investment into its non-gaming facilities, Bloomberg reported.

The Parisian Macao will have 3,000 hotel rooms, a casino, meeting space, retail, a theatre and a themed water park, according to Sands China. The property’s Eiffel Tower features a restaurant and observation decks.

Brokerage Union Gaming Securities Asia Ltd said in a note on November 18 it expected major casino schemes still to launch on Cotai to get 250 new-to-market tables each from the government.

Mr Wong, who became Sands China’s president and COO in November, said he expects Macau’s casino industry to snap a losing streak as early as this month.

“It’s scary that Macau’s gross gaming revenue [GGR] has seen declines for 20 months but I have confidence the drop could end in February,” the executive told Bloomberg.

Based on unofficial month-to-date returns, some investment analysts have suggested that February could be the first month of casino GGR growth in year-on-year terms for the Macau market since May 2014, although the declines should resume in March.

An article in Macau’s draft new gaming law, to create a mechanism to dissolve an existing gaming concession in the event it was not granted a new licence after the current six concessions... END_OF_DOCUMENT_TOKEN_TO_BE_REPLACED