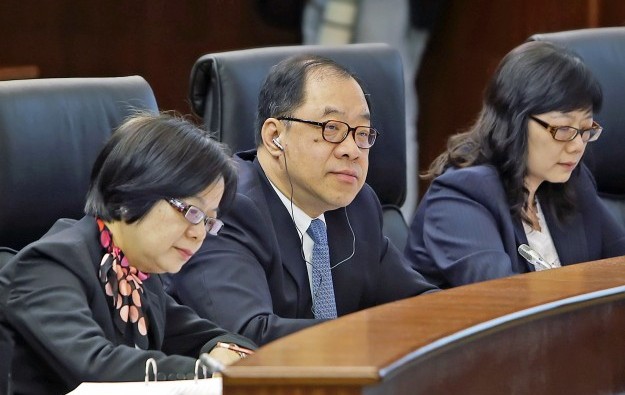 The Macau government will impose a freeze on new casinos after the current phase of expansion in Cotai is completed, Secretary for Economy and Finance Francis Tam Pak Yuen (pictured, centre) said on Thursday.

“After 2016 or 2017, there will be a seven to eight-year period without new properties,” Mr Tam said referring to casino projects. That would allow for some economic consolidation and for society to adapt to the new stage of development, the official told Macau’s Legislative Assembly.

There are currently seven new casino-resort venues under construction in Cotai, scheduled to open between 2015 and 2017.

Mr Tam, whose portfolio includes gaming, also told legislators that, as part of the casino concession renewal process, the government would demand operators “take on higher social responsibility”. He did not elaborate on what that could mean.

Mr Tam was answering questions from legislators on the impact of migrant workers in Macau.

The city had over 149,000 migrant workers in April, the latest official data available. The figure jumped by 50 percent over the past two years.

Casino operators cannot employ migrant workers as dealers. But these workers are widely used in a wide array of ancillary positions in casino resorts, from security to hotels to restaurants.

It is likely that Macau will shortly have a third round of citywide centre-based Covid-19 testing in little more than a week, after the results so far of a second mass test – that was due to finish... END_OF_DOCUMENT_TOKEN_TO_BE_REPLACED