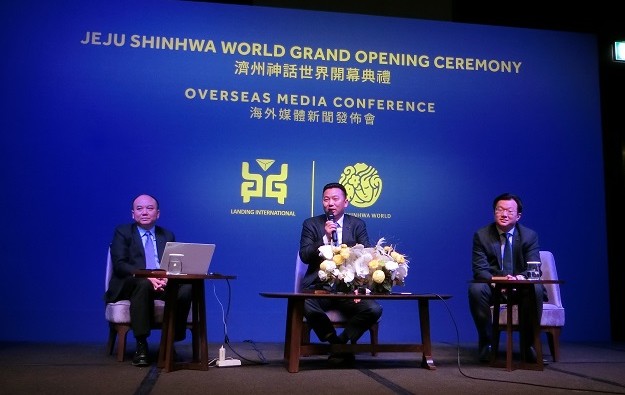 A plan by casino resort investor Landing International Development Ltd to build a family-friendly resort with gaming facilities in the Philippines is a “work in progress”, said the chairman and executive director of the Hong Kong-listed firm, Yang Zhihui (pictured centre). Mr Yang’s firm is the promoter of the recently-launched South Korean casino resort Jeju Shinhwa World.

Mr Yang noted that at a recent casino industry conference in the United Kingdom, Andrea Domingo, the head of the Philippine gaming regulator, the Philippine Amusement and Gaming Corp, a body also known as Pagcor, had mentioned that the country was not accepting any fresh applications for casino licences.

“But in fact, our application [for such licence] has already been under negotiation last year… On this business, it is still a work of progress,” Mr Yang said in response to a question from GGRAsia at a Wednesday press briefing held at the group’s new South Korean resort on Jeju island.

Mr Yang said he had meetings last year with Philippine President Rodrigo Duterte regarding possible development of a “theme park integrated resort” in that country.

“We are not engaged in pure gaming projects – I think our theme is to build a world-class entertainment and leisure resort for families. I’ve told President Duterte about this plan of [building] a theme park; [something] which the Philippines does not have; nor does the country boast any large-scale water parks. He was very interested in our concept,” Mr Yang said.

Landing International is hosting on Thursday what it terms a grand opening ceremony for its Jeju Shinhwa World casino resort, and has invited several local officials to attend. An outdoor entertainment zone called “Shinhwa Water Park” is due to open at the resort in the summer, along with 538 self-branded hotel rooms under the moniker Jeju Shinhwa World Shinhwa Resort. By the year 2020, the group aims to open a Four Seasons Resort and Spa, with about 200 guest rooms, and theme park called Lionsgate Movie World.

“With the completion of the Four Seasons and the second phase of the theme park, it will basically mark the completion of all the works at our [Jeju Shinhwa World] plot,” said Mr Yang in his Wednesday commentary.

“By then, according to our plan, this resort project is done. We may not start any construction afresh,” Mr Yang added. The Jeju casino resort site covers an area of 2.5 million square metres (26.9 million sq feet).

The Landing International chairman said his firm had no plans to acquire any new land plots on Jeju island, but is exploring opportunities for developing so-called integrated resort projects in Southeast Asia. The term “integrated resort” is an industry phrase for large-scale venues typically combining shopping, entertainment, conference facilities and a casino.