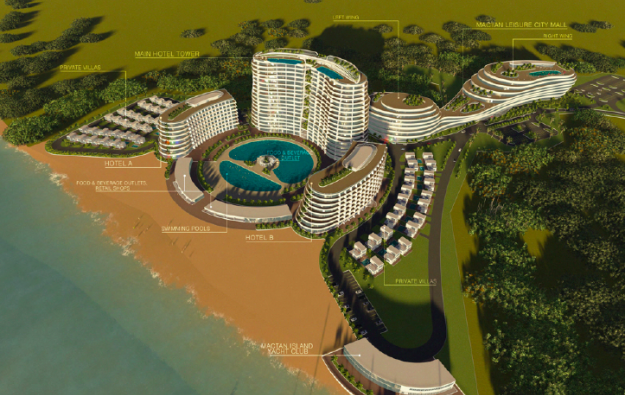 There is currently no shortage of reports about proposed casino projects in Asia.

Two more venues can now be added to the list. But the plans of Sino-America Gaming Investment Group LLC – to spend just short of US$1 billion to build two such properties in beach holiday locations in the Philippines – hold hope that they might stand out from the crowd.

On the face of it, the two proposed resorts sound cookie cutter, if only in terms of the regional industry’s current aspirations. The plans include – although are not limited to – using existing links to Macau junket interests to tempt mainland Chinese gamblers and other tourists to fly in and be entertained. The two resorts combined offer gaming, luxury hotels, shops and conference facilities.

One, on Mactan – an islet linked by bridge to the Philippine holiday island of Cebu – would cost up to US$650 million to build and would be 15 minutes by car from Mactan-Cebu International Airport, which is itself located on the islet. The Mactan resort (pictured in an artist’s rendering) is to be aimed at the mass market.

The other property, targeted at VIPs and premium mass players, would be at Napayawan on Masbate, an island to the north of Cebu. It would cost US$300 million and would be a short distance by road from a proposed international airport for Masbate.

“We think Mactan and Napayawan Island will attract a whole new tourist and casino customer base which most likely would never consider Manila as a tourist destination,” Michael Foxman, managing director of Sino-America Gaming, described as the main investing entity, told GGRAsia.

“Our sites are of interest to the Chinese consumer.  Masbate for example has 1,400 year-old Chinese villages once inhabited by monks. Our resorts will also draw on existing tourism trade from Russian, Japanese, and Korean visitors that prefer beaches to staying in big cities when on vacation.”

Mr Foxman added, regarding the financing for the schemes: “We are in possession of a term sheet from a U.K. brokerage firm, for US$1.5 billion.”  The sum includes working capital as well as the capital expenditure for construction.

“We have a strategy to be able to develop both sites concurrently utilising our financing. It will keep us at about a 30 percent loan-to-value ratio at completion of the project,” stated the executive.

“We have spoken with local banks regarding debt facilities. They have made known to us that they would be willing to participate. What we want to do is get our [gaming] licensing in place first, and then we will go to the banks,” said Mr Foxman, referring to the local gaming regulator, the Philippine Amusement and Gaming Corp (Pagcor).

The executive said it had not been “finally determined” how many table games and slots each resort would have. Pagcor has previously used either the number of hotel keys or the amount in square metres of hotel space provided when determining how much gaming equipment would be approved for new casino resorts.

“We’d like to negotiate with Pagcor until everyone is happy,” Mr Foxman said. But he stated the aim was for approximately 15,000 square metres (161,459 sq feet) of gaming at the Mactan site and about 8,000 sq metres for the casino at Napayawan. Mr Foxman confirmed his company had not yet formally applied for Pagcor licensing, but has been working with the local governments on the two islands for a year.

Pagcor last year said it had placed a moratorium on any new casino licences in the country until mid-2016, when the nation’s current president, Benigno Aquino, steps down. But Francis Hernando, Pagcor’s vice president of gaming licensing and development, has been quoted saying “underserved” areas outside Manila would have a better chance of getting a new licence than would any as-yet-unapproved schemes in Manila.

According to a corporate biography filed with stock market regulators in the United States, Mr Foxman has more than two decades of experience in the construction, real estate, mining, retail, hospitality and gaming sectors. Since 2008 he has served as chief executive and managing director of Denver, Colorado-based RiskWise Global Capital Group LLC, described as a strategic, technical and project risk management company.

One key difference from some other proposals in Asia for island casino resorts is that Sino-America Gaming says it actually welcomes competition, and is willing to put in infrastructure – including via public-private partnership schemes worth up to an additional US$200 million – for roads, telecommunications networks and in the case of Masbate, an international standard airport.

“However unlike the high density close proximity casinos that Pagcor is pursuing in Entertainment City in Manila, we are looking at the idea of having complementary but unique resorts nearby,” Mr Foxman told GGRAsia.

“Our focus is to start building tourism revenues in the communities and to build up the branding of the communities we are moving into. At the same time we will attract others into the market in the next few years… we don’t want to be there in isolation,” he reiterated.

“We have been delighted with the support we have received from the local governments,” Mr Foxman stated.

“The new acting governor of Masbate has taken great strides in terms of facilitating leisure and tourism infrastructure so that foreign companies can come in and start setting up businesses and start attracting both domestic and foreign tourists.”

Sino-America Gaming says it is providing active support to the local tourism industry even prior to seeking project approvals.

“We have already registered a website called Philippinesisfun.com. It’s under construction now and we hope in another four to six weeks to be able to launch it,” Mr Foxman told GGRAsia.

“We are working with Cebu Pacific [Air, a local airline] at the moment to start increasing the number of flights [to the region]… We wish to become a competitive provider in terms of budget travel between Cebu, Manila and Masbate,” he added.

Sino-America Gaming says its aim is that the Mactan project would lead to employment for 6,800 people, including 4,000 full-time workers. Of the 6,800 jobs linked to the scheme, 2,700 would be “direct” hires in newly created jobs.

MRG is registered on the OTC Markets Group exchange, based in New York. The company says it has an office at Macau Finance Centre in Rua de Pequim in Macau, and another in Kowloon, Hong Kong.

According to an MRG filing on February 23, Francis Lam Cheok Va and Hsu Chen-Hai are each five percent shareholders in the company.

Both individuals are described in the same document as linked to Hung Lei VIP room on the 33rd floor of Galaxy Macau, a casino resort operated by Galaxy Entertainment Group Ltd.

“I actually bought Macau Resources Group from them [Francis Lam and his interests], with the goal of pulling out the junket operations [from MRG], such that we could then focus in a more compliant way on bringing products and services and land-based [gaming and tourism] assets,” said Mr Foxman.

“Francis is… super passionate about compliance and about the industry,” added the Sino-America Gaming executive, referring to Mr Lam.

Also working for MRG since September 2014 as chief financial officer is James Preissler who has previously also been identified as a director and chairman of the audit committee of Macau junket room investor Iao Kun Group Holding Co Ltd.

Asked if the proposed new resorts would seek to pursue so-called proxy betting – bets taken over the phone from players not physically present in the casino, which investment analysts say has been a popular segment for some Philippines casino operators, Mr Foxman said: “We don’t want to go down that road.”

He added: “We don’t envisage it being part of our business plan, although we do know it is highly lucrative. What we would rather do is build up our [player] database and have those guys come out as guests of our hotel resort for two or three days, and enjoy the experience in person, rather than getting a quick [phone] call in for a quick game.”

The Mactan resort has the working title ‘Mactan Leisure City’ and would cover a 14-hectare (34.6-acre) tract with a 410-metre long (1,345-foot) beachfront. It will have up to six towers and 1,350 rooms, including apartments.

Sino-America Gaming has already been quoted saying hotel chain Banyan Tree Group would be interested to take part in Mactan and Napayawan; and that the developer is also negotiating with representatives of hotel group Marriott International Inc.

The second property has a working title of ‘Napayawan Island Resort and Casino’ and will be on what is referred to as Napayawan Island, approximately 0.5 kilometres (0.3 miles) off the west coast of Masbate. Napayawan currently has a private airstrip catering for small aircraft and helicopters.

Sino-America Gaming Napayawan’s resort will be aimed at VIP and premium mass customers and have lower density accommodation than the Mactan site. The scheme would have 605 hotel rooms at one end of the island, and approximately 250 lower density villas at the other said Mr Foxman.

“In particular we’ve had an exceptional response from Israeli companies and the Israeli government, to assist in financing projects that drive and support the general validity of the business in the Philippines,” said Mr Foxman.

“We genuinely want to spread prosperity across the markets where we seek to operate,” he stated.

SM Investments Corp, a Philippines conglomerate controlled by the family of billionaire Henry Sy, said in a filing to the Philippine Stock Exchange on March 26, that it had “no specific plans” for a casino project on Cebu. That followed a local media report that it did. But SM Investments did confirm in the same filing that it had 30 hectares of available land in Cebu.

It is likely that Macau will shortly have a third round of citywide centre-based Covid-19 testing in little more than a week, after the results so far of a second mass test – that was due to finish... END_OF_DOCUMENT_TOKEN_TO_BE_REPLACED