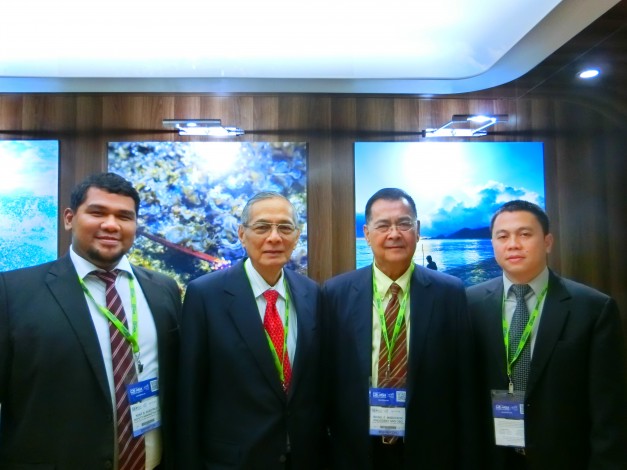 “We thought of initially starting… with online gaming, because it’s easier to set up. And then later on we’ll go into land-based casinos,” Victor Lazatin (pictured, second left), president and chief executive of Pacific Seaboard Leisure and Entertainment Corp, the master licensor, explained to us.

The zone is eight hours by road from Manila and 277 kilometres (172 miles) from the Cagayan Economic Zone Authority (known as CEZA), where a master licensor called First Cagayan Leisure and Resort Corp is allowed to issue online and land-based gaming licences.

The new gaming jurisdiction, located in Casiguran in Aurora province, an economically underdeveloped part of Luzon, was being promoted during Global Gaming Expo (G2E) Asia held in Macau.

The new body is looking to attract online gaming firms – using a licence fee structure similar to CEZA’s – and to bring in land-based casinos to APECO.

Pacific Seaboard is the master licensor – with a 25-year exclusivity period – for online gaming and land-based licences issued by APECO, a free trade area.

Any land-based casinos wishing to operate inside the zone will have to adhere to APECO’s ecotourism policies, said Mr Lazatin.

APECO will charge US$40,000 annually – inclusive of application fees – to licence interactive gaming. The same costs will apply regarding a licence for Internet casino operations or for a studio-based live video streaming service featuring live-dealer table games. There will also be a “gaming levy” of 2 percent of licensees’ gross win per month, or a US$5,000-minimum levy per table per month: whichever is higher will be applied, according to information provided by Pacific Seaboard. APECO will however offer companies locating there what it refers to as an “income tax holiday”.

Regarding the number of land-based casino licences that might be issued by APECO, a delegation from Aurora said “no limit” had been set: nor has APECO defined any minimum or fixed investment amount for setting up a land-based casino in the zone.

“The land-based casinos [are] going to be part of the ecotourism development of APECO. So we will go hand in hand [with Pacific Seaboard] in promoting that,” Israel Maducdoc (pictured, second right), APECO’s president and chief executive, told GGRAsia.

“We’ve already been talking to a few locators [investors] that are interested in setting up some hotels and casinos there,” he added. A 496-hectare area of Aurora near Casiguran – most easily accessible by road from Manila – has been earmarked for land-based gaming schemes.

“If you take your chopper [helicopter] from Manila to Casiguran [airport], it will take 40 to 45 minutes. And from the airport to the zone, it’s about five minutes,” Archimedes Aldaba (pictured, first right), an lawyer at APECO, told GGRAsia, referring to the likely appeal of Aurora to VIP customers of any casinos that are built there.

Mr Maducdoc noted that additionally, 12,000 hectares of the heavily-forested San Ildefonso peninsula, also part of APECO, will also be available for development of lodging and entertainment facilities in a “later phase”.

An expansion of a port in the zone is said to be underway and will cater to international trading. The port will be opened in June 2017, the delegation said.

After more than two hours of debate, members of Macau’s Legislative Assembly approved on Monday the first reading of a gaming bill that will shape how the industry looks for years ahead, with 30... END_OF_DOCUMENT_TOKEN_TO_BE_REPLACED