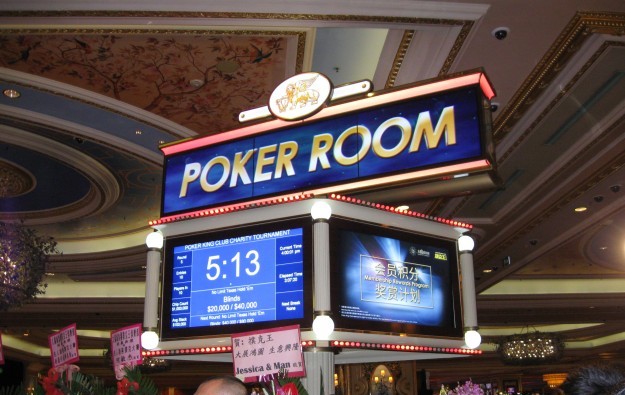 The promoter of the now-cancelled 2019 edition of the Poker King Cup Macau has told GGRAsia his organisation is still awaiting guidance from the city’s authorities – via another party – on whether the regulatory processes for such tournaments have changed.

The promoter, Poker King Club, announced on Tuesday that it was cancelling a tournament scheduled to take place from March 15 to 21 at its Venetian Macao casino resort poker room (pictured in a file photo). The organiser had said it decided “not to move forward” with the Macau tournament due to “unforeseen circumstances” and promised partial refunds on some air tickets and hotel bookings made by would-be contestants.

Other industry sources have told GGRAsia that in the past it was not unusual for approvals from the local regulator – the Gaming Inspection and Coordination Bureau, also known as DICJ – to come for locally-held poker tournaments shortly before events were to be held. There had been an understanding, said the sources, that tournament arrangements could be advanced in expectation that approvals would come through.

It had been reported in some local media – citing the organisers – that regulatory approval for Poker King Cup Macau 2019 had been refused.

But Poker King Club president Winfred Yu told GGRAsia on Friday: “The approval for this Poker King Club event has not been granted in time, and we’re still trying to understand from DICJ, through Venetian Macao, what has happened.”

He added: “There could be some possible new regulatory requirements or procedures needed for applying to host a poker tournament, and we are still trying to understand [that]… and wait for more information and instructions from the Venetian [Macao] and DICJ,” he remarked to us.

Mr Yu clarified to GGRAsia that as a third-party promoter of an event at a licensed Macau casino – and not a Macau gaming licensee in its own right, in the manner of the Venetian Macao’s operator Sands China Ltd – the poker brand did not have the authority to deal directly with the local regulator.

GGRAsia approached Macau’s gaming bureau seeking comment on the reasons the Poker King Cup Macau 2019 had not been approved as of Tuesday, March 5, but had not received a reply by the time this story went online.

When asked if Poker King Club would shy away from trying to host events in Macau because of the cancellation, Mr Yu reiterated: “We’re yet to understand what could be the changes in the restrictions or regulations for hosting the poker tournaments here [in Macau].”

“To me, Macau is still the poker capital of Asia. We’re still fighting for any grounds that will support us to host [poker] tourneys here,” Mr Yu remarked to us.

Macau’s casino gross gaming revenue (GGR) for the first five days of February is estimated at MOP1.9 billion (US$235.1 million) – or MOP380 million per day – a level that suggests a “45... END_OF_DOCUMENT_TOKEN_TO_BE_REPLACED