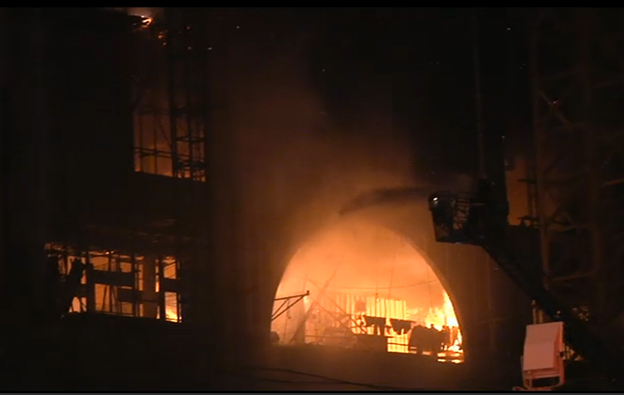 Macau’s Judiciary Police are investigating a fire that broke out on Saturday at the Grand Lisboa Palace construction site on Cotai as a possible case of arson. It was the second time this year that a fire at the site had been reported to the authorities: the first blaze was in March.

A total of 88 construction workers had to be evacuated from the site because of Saturday’s blaze, according to local media. One site worker was taken to hospital for medical treatment after being rescued by firefighters. A firefighter also went to hospital following the incident.

At the time this story went online, SJM Holdings had yet to comment regarding whether the fire would delay construction work at Grand Lisboa Palace or put back the completion date for the project, according to media reports.

The fire reportedly broke on Saturday night and was put out by early Sunday morning. The latest incident was the fourth fire since 2015 at the construction site, according to local media.

The March blaze was also investigated as suspected arson, local media reported at the time, citing the Judiciary Police. No result from the investigation has been publicly announced so far.

Work restarted on August 2, with Ambrose So Shu Fai, SJM Holdings’ chief executive, stating that day the firm would “readjust the construction programme and try to catch up” with its stated target of a second-half 2018 launch.

Brokerage Sanford C. Bernstein Ltd stated in a note issued last month that it was “very unlikely” that SJM Holdings would be able to stick to its plan to open its new Cotai casino resort in the second half of 2018. “Based on our research, we estimate that the property will not open until early 2019,” said the memo from Sanford Bernstein’s analysts Vitaly Umansky and Zhen Gong.

Only two of Macau’s 18 satellite casinos – the Rio Casino and the President Casino – have closed amid changes to the city’s regulatory system for such properties, and against... END_OF_DOCUMENT_TOKEN_TO_BE_REPLACED