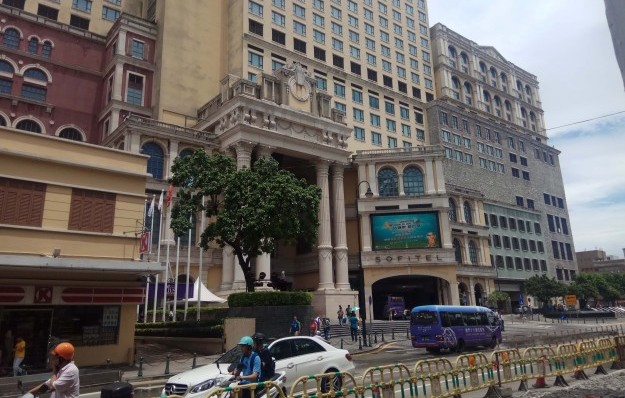 Waterfront Macau casino resort Ponte 16 (pictured), which last year made the news when its main casino floor was left underwater after the record-breaking storm brought by Typhoon Hato in August, is in the process of acquiring its own mechanical anti-flood barrier that it plans to install soon.

So said Hoffman Ma Ho Man, executive director and deputy chairman of Success Universe Group Ltd, the majority owner of the property, which operates under the gaming licence of SJM Holdings Ltd.

He made the comments to GGRAsia after the Inner Harbour neighbourhood of Ponte 16 suffered mild flooding on Saturday and Sunday following heavy rains and seasonal high tides. Citing information from the city’s Meteorological and Geophysical Bureau, local media reported flooding at the Inner Harbour had occured to a maximum depth of 0.5 metres (1.6 feet) on Saturday, and 0.4 ms on Sunday.

Mr Ma said Ponte 16 had been “unaffected” by the latest high waters.

But he added: “Following Typhoon Hato last year, we’ve upgraded in the beginning of this year our flood barriers to 1 metre in height, which we can put at the front of the property facing the main road and facing the river respectively.” The river referred to is a water channel separating Macau from the Wanchai district of neighbouring Zhuhai in mainland China.

“Now, we are actually in the process of acquiring a mechanical anti-flood barrier, which we expect to see it in place in one to two months’ time,” the Success Universe executive added.

Hong Kong-listed Success Universe had reported an annual loss in 2017, providing commentary at the time that its results were adversely affected by the disruption at its Ponte 16 venue from Typhoon Hato, the strongest storm to hit Macau in 53 years. During that event, the ground floor gaming area suffered flooding to a depth of up to 0.91 metres, with casino operations suspended for several days afterwards.

In the days following Typhoon Hato, the Macau government had said it was committed to the idea of building a flood defence system to protect the Inner Harbour.

On Sunday, after the latest incident, the Macau government issued a statement saying several public departments were available to provide help to residents and businesses. Earlier this month the Civic and Municipal Affairs Bureau – a body responsible for the operation of the city’s drainage network – told media it planned to start building a new storm water pumping station at the Inner Harbour district in the fourth quarter this year.

Japanese conglomerate Konami Corp posted a net profit of just above JPY32.26 billion (US$294.2 million) for the 12 months ended March 31, 2021, up 62.2 percent from the previous year. That was... END_OF_DOCUMENT_TOKEN_TO_BE_REPLACED