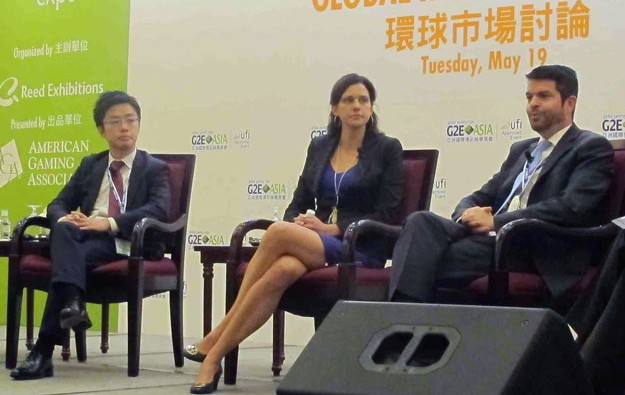 Legalising casino gaming in Japan will not be an easy task and popular support for it “is not yet very strong,” suggests Ryo Takizawa (pictured left), associate at international law firm Greenberg Traurig LLP.

Tokyo-based Mr Takizawa, described as an adviser on gaming regulation in Japan, was one of the speakers at a conference session during the recent Global Gaming Expo (G2E) Asia in Macau.

In April a group of Japan’s pro-casino lawmakers submitted a fresh casino legalisation bill to the country’s parliament. The bill – a revised version from an effort last year that ran out of parliamentary time – was championed by members of the ruling Liberal Democratic Party (LDP), the Japan Innovation Party and the Party for Future Generations, Reuters news agency reported.

“It is not yet sure when the bill will be passed, although it is expected to be approved,” Mr Takizawa told GGRAsia in an interview, adding the bill needs more popular support to gain traction.

The lawyer said the parties in the ruling coalition have yet to reach a compromise on the actual details of legalising casinos in Japan. Komeito, a Buddhist-influenced political party that is a junior partner in Prime Minister Shinzo Abe’s government, has shown major reservations about such facilities, citing fears of boosting gambling addiction and other social ills.

“The parties still have to reach consensus and gather more popular support,” said Mr Takizawa. “I don’t think that – in this case – Komeito’s stance will be so strong that it could lead to a [coalition] break-up.”

The legal expert said Japan’s parliament is currently focused on discussing national security bills. Mr Abe’s government is set to have the current parliamentary session extended to late July or early August as it seeks to push through several bills this summer, Japanese media have reported citing sources that were not identified.

“If the [casino legalisation] bill introduced this April is passed, the process will move forward relatively smoothly,” said Mr Takizawa.

Casino legalisation in Japan will be a two-statute process. After an enabling bill legalising casino resorts at the conceptual level, a second piece of legislation is expected to detail the specifics, including the number of casino licences, locations, tax rates and whether locals would be allowed to gamble domestically.

Mr Takizawa said the complementary legislative process might be completed via several bills rather than a single consolidating one – “for example one to regulate the criteria for choosing bids, granting licences; another to implement an oversight body.”

“It could even happen that there would be a complementary bill to prevent and address social problems,” said the lawyer.

The cultural need in Japan to get consensus on important political decisions was identified – during another conference session of G2E Asia – as a key stumbling block to the industry’s advance in that country.

Praveen Choudhary, managing director of Morgan Stanley Asia Ltd, said during the panel that he thought there was “a more than 50 percent chance” of such enabling legislation in Japan going through this time round.

“What has changed is last time around they [the bill’s proposers] wanted to have consensus before they put the bill on the floor. This time, they are going to put the bill without having consensus and have a vote on it,” said Mr Choudhary.

Mr Takizawa said the social ills issue raised by objectors to gaming “are just one of many issues to be addressed, both by the government and legislators”.

While Japan continues its debate about legalising casinos, neighbouring jurisdictions, including South Korea, have moved forward with plans for integrated resorts. In the latter country, the government has announced plans to grant at least two more licences this year.

“[Foreign] Jurisdictions developing their gaming industries will try to attract Japanese people,” said Mr Takizawa. If casinos are allowed in the country, Japan might impose an entry levy on locals but not ban completely its citizens from entering casinos, he added.

The American Gaming Association (AGA), a casino industry trade and lobbying body that says it is firmly engaged in the debate about legalising casino gambling in Japan, adds that while it understands individual operators wish to lobby for their own investments, it is important the industry speaks with one voice in the run up to possible legislation.

“[U.S.-based] Casino operators are trying to position themselves the best way they can so that they can stand a chance to win a licence” if Japan legalises casinos, said AGA’s senior vice president of public affairs Sara Rayme (pictured centre).

“We think it’s important that the industry works together and tells its story about the experience it has not only domestically but also internationally,” she added during the conference session.

Ms Rayme said the development of the gaming industry in Asia is turning into a competition among countries to implement the most favourable regulations and policies, something that has happened in the U.S.

Mr Takizawa said he agreed that the expansion of the gaming industry in Asia “could have an impact on Japan”. “But it all depends on how the industry is regulated. So, it’s too soon to say to what extent that impact will be.”

On the eve of a new round of debate about legalising casinos in Japan, Clarion Events Ltd has announced that its second Japan Gaming Congress would take place from October 7 to 9 in Tokyo.

“The focus of the event will be on identifying and implementing an integrated resort model that will maximise benefits for all parties, including operators and the Japanese economy, whilst promoting the importance of responsible gaming,” the organisers said.

The imminent return of package tours from mainland China will not only help boost Macau’s tourism businesses, but is also expected to help casinos gain more foot traffic in their mass gaming... END_OF_DOCUMENT_TOKEN_TO_BE_REPLACED