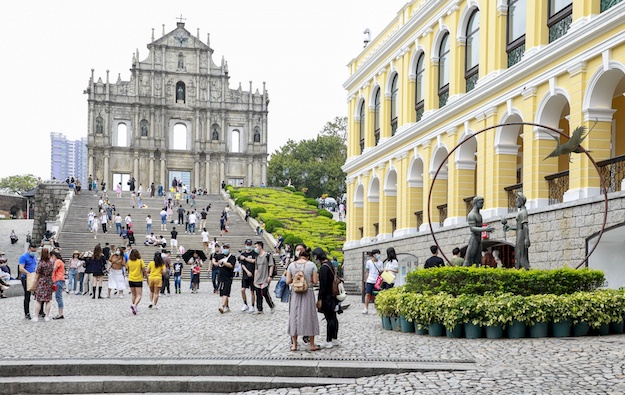 Macau’s tally of visitor arrivals may reach approximately 20,000 per day during the remaining days of August and into September, and 30,000 per day for early October’s so-called Golden Week, provided the Covid-19 situation in mainland China continues to stabilise and improve, said Macau Travel Industry Council president, Andy Wu Keng Kuong, in comments to GGRAsia.

Macau eased on August 25 (Wednesday) the validity period for a Covid-19 ‘negative’ test result required for cross-border travel between the city and neighbouring Guangdong province, in mainland China. According to the relaxed rule, such travellers can use a nucleic acid test certificate issued within seven days of their journey, instead of one issued within 48 hours of their trip, as required previously.

As of Wednesday, the relaxation had “immediately resulted in an apparent increase in [foot] traffic at the borders” between Macau and Zhuhai next door, said Mr Wu.

“We expect that Macau may see around 20,000 tourist arrivals a day during the remaining days this month, and into September,” the travel trade group boss remarked to GGRAsia.

“If Macau can maintain its existing seven-day Covid-19 test rule,” for Guangdong-Macau travel, “and the city’s list of mainland China cities that need to undergo quarantine continues to dwindle, then it will help our hotel occupancy to reach around 60 percent,” judged on average nightly, Mr Wu added.

Mainland China is currently the only place to have a largely quarantine-free travel arrangement with Macau. The arrangement covers places on the mainland classified as ‘low risk’ for Covid-19 infection.

The number of places in mainland China labelled as either ‘mid-’ or ‘high-risk’ for Covid-19 infection has continued to decrease in recent days. Guangdong province – Macau’s major feeder market for tourist arrivals (visitors pictured in a file photo) – has also recently eased travel-related restrictions for outbound travellers.

The head of the Macao Government Tourism Office (MGTO) said in an interview on public radio, broadcast on Friday, that her department expected the city would receive above 25,000 visitor arrivals per day for the extended holiday period surrounding China’s National Day, on October 1.

The volume of mainland tourists to Macau can be related not only to consumer choice, but also to the speed and volume of exit visa issuance by the mainland authorities, according to various commentary by investment analysts covering the Macau casino industry.

Mr Wu of Macau Travel Industry Council, was nonetheless more bullish about the outlook for so-called October Golden Week, than was the tourism bureau.

“Macau’s visitor arrivals for the National Day holiday [period] could look to exceed 30,000 a day, which would be a scenario similar to May’s Labour Day break,” Mr Wu said. Though he added: “That is subject to changes in the mainland’s Covid-19” situation.

He was optimistic also that the mainland authorities might permit later this year the resumption of package tour groups from the mainland to Macau. But he thought this was likely to be adopted “in phases”.

“I don’t think mainland would permit a large number of provinces or cities to resume Macau-bound package tours all at once, but to permit it first in a small number of places where the Covid-19 situation is relatively stable.”

Macau mass-market casino gross gaming revenue (GGR) for the recent Chinese New Year (CNY) holidays could have recovered to at least 60 percent of that for the 2019 break, when the festivities were in... END_OF_DOCUMENT_TOKEN_TO_BE_REPLACED