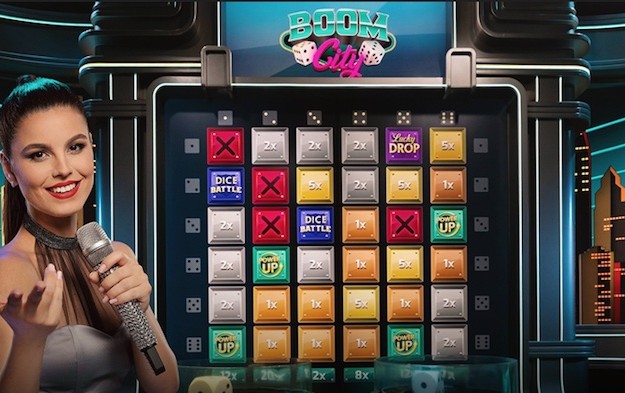 Players can place bets on the 36 squares within a 6×6 grid of Boom City and win awards through the roll of two dice. These include the grant of one of three bonus games, or an award of an instant cash prize. The latter is displayed on the game grid, with a “bronze” prize carrying an award of a 1x multiplier; “silver” a 2x prize, and a “gold” grid carrying a 5x win.

Players will experience an instant loss when landing on a grid with a ‘bust’ symbol.

Boom City also has a “Power-Up” feature that enables higher winnings for players, where squares are randomly multiplied. In addition, the dice game also contains features that increase the multipliers on offer or aid the players in the progression of additional levels.

Players can access two special games when landing on a Dice Battle square, or a Lucky Drop square.

When landing on a Dice Battle square, players are provided with a choice between two “battling” dice, where each side will have three rolls to gain as high a number as possible; the winning side will be awarded the total of their winnings plus the losing dice’s cumulative amount.

The Lucky Drop bonus round provides six rolls of a dice, where players choose one of six columns populated with increasing multipliers for each successive roll correlating to their chosen number.

Pragmatic Play said it now produces “up to six new slot titles” a month, as well as offering its Live Casino and Bingo games portfolio. They are all available through a single application programming interface, the firm mentioned in its release.

The imminent return of package tours from mainland China will not only help boost Macau’s tourism businesses, but is also expected to help casinos gain more foot traffic in their mass gaming... END_OF_DOCUMENT_TOKEN_TO_BE_REPLACED