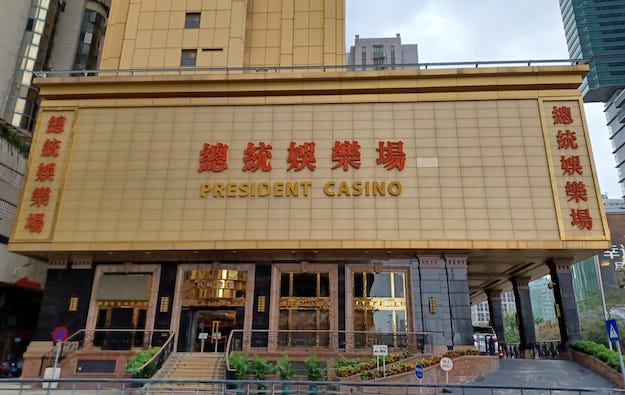 Macau casino operator Galaxy Entertainment Group Ltd has confirmed to GGRAsia that the Rio Casino as well as the President Casino (pictured), venues located in the city’s downtown area, ceased operations by the end of Wednesday, June 15.

The casinos were run under respective service agreements with Galaxy Entertainment. The two venues are “currently taking inventory,” said the casino firm in a statement.

Galaxy Entertainment identifies these venues for reporting purposes as City Clubs. Aside from these two properties, the company has also a service agreement regarding the Waldo Casino, a short distance from the Outer Harbour Ferry Terminal on Macau peninsula.

A notice respectively on display on Thursday morning at the entrance of Rio Casino and of President Casino redirected patrons to other gaming venues managed by Galaxy Entertainment for those seeking “chips or slot tickets redemption”. The company also runs casinos at its flagship property Galaxy Macau, and at Broadway – two properties in Cotai – and at the StarWorld Hotel in downtown Macau. 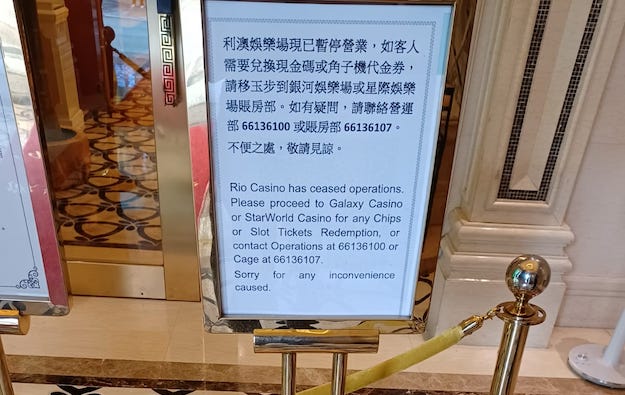 In Wednesday’s statement, Galaxy Entertainment said its employees working at the two now-shuttered City Clubs “will be reallocated” to the group’s other casinos, “with all of their employment terms remaining unchanged”.

Galaxy Entertainment would also “provide them with a series of vocational training programmes to assist them in adapting to their new working environment,” the company added.

According to Galaxy Entertainment’s 2021 annual report, the three City Clubs contributed HKD62 million (US$7.9 million) in adjusted earnings before interest, taxation, depreciation and amortisation (EBITDA) to the group’s earnings, up 130 percent year-on-year. In 2019, before the onset of the Covid-19 pandemic, such contribution was HKD117 million.

In the statement, Galaxy Entertainment said it was grateful for the “support” provided by patrons and the community to the Rio Casino and the President Casino over the years. “As always, Galaxy Entertainment remains fully committed to making positive contributions to the Macau’s leisure and tourism industry,” it added.

Earlier this month, Macau’s Secretary for Economy and Finance, Lei Wai Nong, confirmed to reporters that the Macau government had received requests for “operational adjustment” regarding “a few” so-called satellite casinos.

Mr Lei, who oversees the city’s gaming industry, stated at the time that requests to discontinue satellite casino business were based on “commercial” considerations of investors, and were not related to the government’s planned regulatory changes as drafted in the gaming law amendment bill.

In the latest version of the gaming law amendment – expected to undergo a final reading next week at the city’s Legislative Assembly – the government scrapped a prior proposal that the city’s satellite casino promoters should tie the ownership of their respective gaming floors to one of the next generation of gaming concessions.

Nonetheless, the planned legal update mandates that third-party entities in the form of “management companies” would be the designated runners of such satellite venues, and that they would not be able to share “revenue” from gaming operations.

Casino equipment supplier Sega Sammy Creation Inc said in a Friday release it was debuting its Genesis Crest 43J cabinet in Asia. The product will be available at an in-person trade show, G2E Asia:... END_OF_DOCUMENT_TOKEN_TO_BE_REPLACED