Problem for May if mainland Covid lingers, says Macau CE 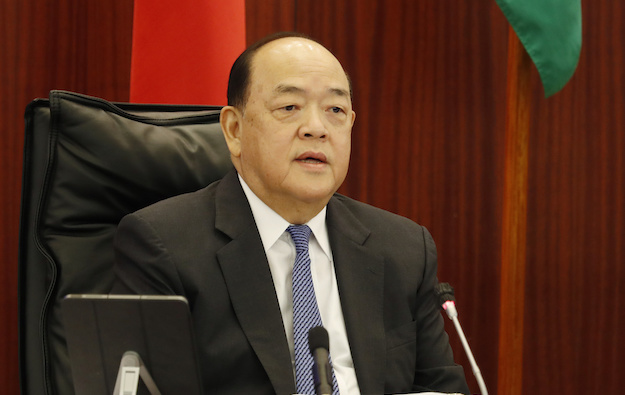 Macau was likely to have a “big problem” in terms of tourism demand for the holiday period encompassing Labour Day on May 1, unless the Covid-19 situation on the mainland improved between now and the end of April, admitted on Tuesday Macau’s Chief Executive, Ho Iat Seng.

Mr Ho (pictured) was speaking during a question-and-answer session with members of the city’s Legislative Assembly. A travel industry spokesman made a similar comment to GGRAsia earlier on Tuesday.

The city’s leader noted, regarding in particular the Covid-19 situation in the neighbouring mainland province of Guangdong : “Today is the 12th already. If we do not see a zero-Covid-19 case scenario there by this month’s end, we are going to have a big problem with the May 1 [Labour Day] holiday.”

But he added that after “this wave” of Covid-19 infections on the mainland – including in Shanghai as well as Guangdong – was “past and the situation stabilises in the mainland, we could resume again the discussion” with the mainland authorities “to resume package tour visa issuance “.

Package tours from the mainland to Macau were suspended near the start of the pandemic, in early 2020. Visas for independent travellers – known as the Individual Visit Scheme – take longer to get than pre-pandemic times, and are not currently available online, a number of investment analysts have said in notes issued in recent months.

China’s State Council has designated April 30 to May 4 as this year’s Labour Day holiday season, a period sometimes referred to by investment analysts as “May Golden Week”, and in pre-Covid times typically a period of high demand for Macau gaming services.

Macau’s Chief Executive also mentioned in his Tuesday remarks at the Legislative Assembly, that currently there was little scope for travel easing with mainland – currently the only place to have a largely quarantine-free travel arrangement with Macau.

Mr Ho stated “we have never stopped trying to negotiate” for eased travel with the mainland.

He added: “Last year, we had agreement with the mainland’s travel authorities that four to five provinces should be able to resume package tours once we [Macau] reached 80-percent vaccination coverage.”

But then Covid-19 had occurred “in some of our target markets: Nanjing, Guangdong, and Zhejiang, etc… so the plan got delayed”.

Mr Ho added he was aware that flights from the mainland and elsewhere had been subject to disruption due to Covid-19 containment efforts.

Macau’s leader also offered commentary about the financial pressure on the local casino companies that employ tens of thousands.

All the six gaming operators had “insisted on not laying off” Macau ID holders, Mr Ho told legislators. He added: “We do have situations where the operators are offering non-paid or half-pay leave, but they did manage without firing anyone.”

But Mr Ho stated: “In fact, the human resources they have are in excess relative to the visitor volume. So we have to recognise the fact that the operators have already shouldered their responsibilities.”

The Chief Executive noted: “Macau’s unemployment rate now is 4.3 percent.” He added that was related to factors including what he termed the “consolidation of junket businesses, and satellite casinos”.

Though he added “even if” the city were not updating its gaming law, “with the international situation we are facing now, the [unemployment] problem was still bound to happen”.

The Macau government hinted on Friday it might under the proposed update to the city’s gaming framework, permit some kind of performance-related system – linked to “turnover”... END_OF_DOCUMENT_TOKEN_TO_BE_REPLACED