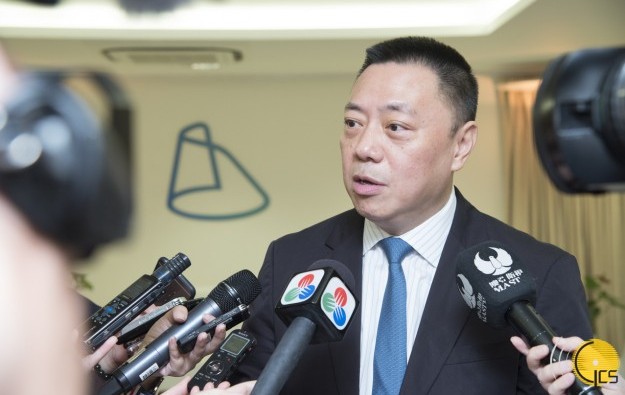 Macau’s de facto ban on proxy betting – introduced this Monday (May 9) – “will not hurt the sustainable development of the gaming sector,” Secretary for Economy and Finance Lionel Leong Vai Tac (pictured) told reporters on Saturday.

Mr Leong – quoted in a government press release – said the forecast was based on an assessment made by the city’s casino regulator regarding the impact of a ban on the use of telephones at VIP gaming tables.

The authorities in Macau have clarified that with effect from Monday, the use of phones at gaming tables will not be permitted. In practise, that means an end to proxy betting. Prior to Monday, VIP clients could use their phones while gambling, provided they had registered for that purpose, said Mr Leong. He didn’t clarify with whom the players had been required to register .

In casino markets where proxy betting is regulated, local regulators usually allow live footage of the action at the casino gaming tables to be streamed online. This aims to reassure players they are not being defrauded of their rightful winnings.

In Macau – even prior to Monday’s rule change on use of telephones at tableside – video streaming of table action was not permitted; nor was proxy betting. But because some VIP players could use their phone at the gaming tables, that generated a loophole in the system and informal proxy betting was still taking place, say industry sources, adding that this was only happening in the high-roller segment.

In his Saturday comments, Secretary Leong highlighted that proxy betting was not permitted in Macau. He added that the ban on phone use at gaming tables aimed “to avoid unnecessary misunderstandings and to eliminate illegal actions”.

Union Gaming Securities Asia Ltd said in a Monday note that the directive banning phone usage – the text of which has not been made public by the local authorities – was given directly to the casino operators, rather than to junkets. “The casino operators then passed the information to junkets, some of whom were taken by surprise,” wrote analyst Grant Govertsen.

He added: “In conversations we’ve subsequently had with junkets it doesn’t appear the concept of banning [on a de facto basis] proxy betting had come up in any meaningful way as part of the ongoing discussions the junkets are having with Macau’s gaming regulator as they [the Macau authorities] attempt to enhance the regulatory environment for VIP. In the eyes of the junkets, this likely appeared to be an unwelcome 11th hour surprise.”

The ban on proxy betting in Macau comes amid China’s anti-corruption campaign. The drive includes measures to curb graft by public officials, and the laundering of money gained via acts of corruption such as influence peddling or theft of public assets.

Mr Govertsen said that the ban on proxy betting in Macau was already leading some junkets to promote their proxy operations in the Philippines – where such activities are permitted – as an alternative to Macau.

“Questions remain, including enforceability. We think the biggest question will be how the [Macau proxy betting] ban can be enforced,” the Union Gaming note added, although it also stated “in the context of the upcoming mid-term review and eventual licence renewals it would likely behoove all operators to be as compliant as possible with any directive”.

Wells Fargo Securities LLC said in a Friday note that enforcement of the ban on phone use at VIP gaming tables “would be challenging”.

Several investment analysts covering the gaming sector have stated that the measure should have only a marginal impact on the earnings of Macau’s casino operators.

The ban on mobile phone use might be followed by other directives with the potential to have some negative impact on Macau’s casino industry. Last week, Miguel Luís Castilho – a legal advisor from the casino regulator, the Gaming Inspection and Coordination Bureau – said in a public forum that the local authorities were mulling rules banning gaming workers from casino floors outside work hours.

The casino regulator’s legal advisor – quoted by local media outlet Jornal Tribuna de Macau – added that the government was also preparing to increase penalties regarding restrictions on the advertising of gaming.

Some Macau casinos visited by GGRAsia on Thursday, actually had tables that were closed, notwithstanding strong consumer demand during Chinese New Year (CNY). The reasons for some tables being... END_OF_DOCUMENT_TOKEN_TO_BE_REPLACED