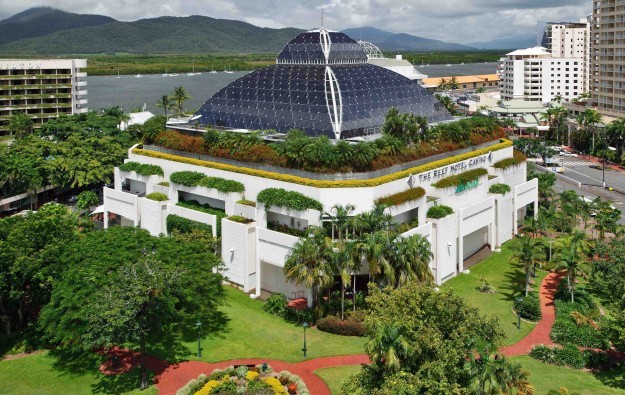 Directors responsible for administering the Reef Casino Trust (RCT), owner of the Reef Hotel Casino (pictured in a rendering) in Queensland, Australia, on Monday reiterated their recommendation to holders of the trust’s units to sell the property to a Hong Kong-based U.S. dollar billionaire.

It follows a statement by Aquis Reef Holdings (Aus) Pty Ltd – wholly owned by Tony Fung Wing Cheung, former chairman of Hong Kong-based financial services company Sun Hung Kai and Co Ltd – that if a new deadline of November 28 were not met, the deal might falter.

A filing on Monday from Reef Casino Trust to the Australian Securities Exchange said all directors unanimously recommended the deal, adding it was for a “100 percent cash consideration, and provides unit holders with the opportunity to crystallise cash values and realise their investment…”

A trust filing on October 17 said Mr Fung was offering AUD4.35 (US$3.81) per RCT unit. Up to that date 81 percent of unit owners had agreed, but there is a condition that 90 percent accept.

According to an RCT filing in March, the biggest unit holders are Casinos Austria Group with 42 percent, the French hotel firm Accor SA with 29.96 percent and businessman Gary Mauric with 5.03 percent.

At the time of the March filing, RCT had 49,801,036 units on issue, indicating a takeover transaction valued at approximately AUD216.83 million.

However also attached to the deal is an offer by Mr Fung to acquire Casinos Austria International Cairns – the operator of the casino at Reef Hotel Casino, which is located in Cairns – for AUD30.88 million; and to acquire Reef Corporate Services Ltd (owned by Casinos Austria and Accor) for AUD12.6 million, plus another venue called Casino Canberra in the Australian Capital Territory, for AUD8.85 million. That takes the cost of the whole takeover process to more than AUD269 million.

Aquis is also seeking approval to build a AUD8.15-billion casino resort at Yorkeys Knob near Cairns, and dubbed Aquis Resort.

In August the Australian Competition and Consumer Commission said it was satisfied that the takeover of Reef Hotel Casino and possible construction of Aquis Resort would not amount to a monopoly of the local market.

The imminent return of package tours from mainland China will not only help boost Macau’s tourism businesses, but is also expected to help casinos gain more foot traffic in their mass gaming... END_OF_DOCUMENT_TOKEN_TO_BE_REPLACED