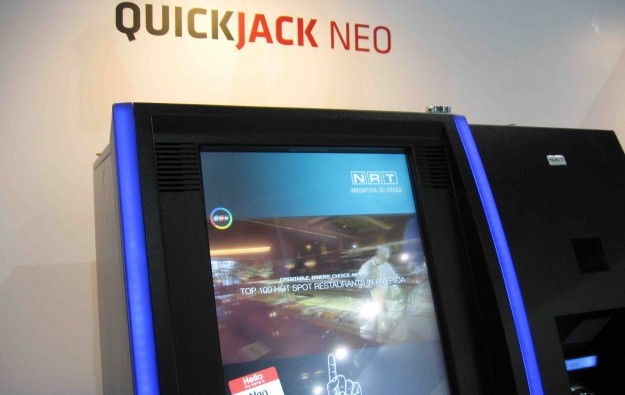 “It’s ‘future proof’ in the sense that it can be used for future types of payment transaction – such as Alipay – and any kind of mobile payment,” Art Ayow, NRT’s vice president for sales, told GGRAsia. He was speaking during the recent Global Gaming Expo (G2E) Asia 2016 casino industry trade show, held in Macau.

As an example of the pace of change in payments technology for leisure industries, Singapore casino complex Resorts World Sentosa announced on May 23 a strategic collaboration with Ant Financial Services Group. Under it, Alipay – China’s largest mobile payment provider – was appointed Resorts World Sentosa’s preferred partner for contactless mobile payments, done by visitors from mainland China, at non-gaming facilities of the site.

The QuickJack NEO also has the features traditionally associated with payment kiosks.

“We can do ATM [automated teller machine] transactions in the way we have always done – via debit, credit,” stated Mr Ayow.

“As usual, we have two bill validators. But what we have also done, very significantly, is to introduce a user interface that includes a lighting package. For example, when a person puts in a redemption ticket, the product makes sure the lighting and the instructions follow the various stages of the transaction, culminating with the extraction of cash,” explained the NRT executive.

The large screen on the product can be deployed in a number of ways: one part can be used for transactions, and another part for marketing.

“This can be done simultaneously while you have a ‘captive audience’ conducting a transaction,” stated Mr Ayow.

NRT has also introduce some features that it says make it easier for service engineers to conduct routine maintenance. They include a built-in, touchscreen laptop inside the kiosk, and enhanced lighting for its interior. Mr Ayow says this feature was included because many casino floors have low-key lighting, making it a challenge for equipment service engineers to do their work.

The company believes another important selling point of the kiosk is its contribution to cash recycling processes.

“We believe that in the future, operators will be moving toward cash recycling. At present cash handling and cash recycling are some of the most labour-intensive and vulnerable aspects of the business. And with Macau, for example, looking for all kinds of ways to improve its productivity, we feel this product is going to go a long way to addressing issues,” said the NRT executive.

Units of the new kiosk are to be installed in new properties in Macau and in the Philippines, stated Mr Ayow.

The QuickJack NEO can be fitted with so-called ‘intelligent’ cassettes to hold cash. NRT says they enable a venue operator to check electronically the amount of cash they contain, without the need to open them manually.

“If you have a cassette that’s full, you just take it out and move it to some part of your operation where you need to dispense cash,” said Mr Ayow. “The more you minimise the human handling of cash, the better: it saves time and it reduces the risk of any breach in security,” he added.