Rail link to Hengqin to be built in 4 years: Macau govt 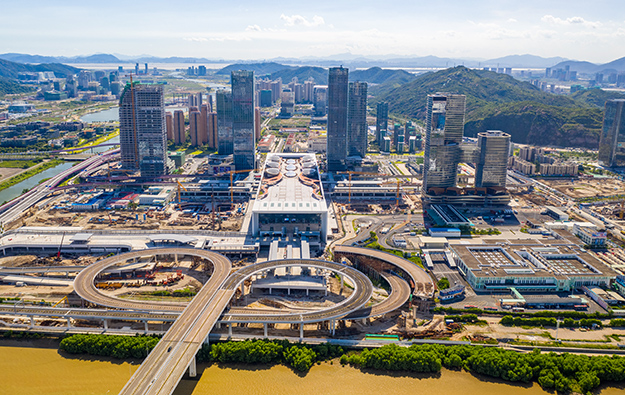 Macau’s Secretary for Transport and Public Works, Raimundo do Rosário, says he is “confident” that construction of a planned extension to the city’s Light Rapid Transit (LRT) rail system, that will link it to neighbouring mainland China territory at Hengqin island, will be completed within four years.

He made the comment to Macau media. The LRT extension will connect the Lotus Bridge checkpoint at Cotai, to a Hengqin transport hub known as Hengqin Port (pictured, foreground).

Construction of the rail link was to start “in March”, said Mr Rosário on the sidelines of a Monday event. Work on another planned section of the LRT, to connect Taipa to the Barra district on Macau peninsula, is expected to start concurrently with the Hengqin portion, the top transport official noted.

Hengqin island had been touted – prior to the Covid-19 pandemic – as Macau’s partner on two-centre holidays packaged for Chinese holidaymakers. A variety of tourism infrastructure – including themed attractions – has been developed on Hengqin in recent years.

Mainland China is the only place currently to have a largely quarantine-free travel bubble with Macau. Even before the pandemic, the largest-single contributor of tourists to Macau has for a number of years been the mainland China market.

Authorities in Macau’s neighbouring mainland province, Guangdong, have mentioned there are plans to build in China an ultra-high speed rail line that will link via a circa 3.6-hour journey of more than 2,000 kilometres (1,243 miles), the capital Beijing to the Guangdong cities of Guangzhou and Zhuhai. From there, there will be onward lower-speed connection to Macau and Hong Kong respectively. The information was cited recently by mainland media.

Another high-speed so-called ‘maglev’ – magnetic levitation – line that the Guangdong government plans to build, would connect Shenzhen and Guangzhou to Shanghai – a distance of more than 1,400 kilometres – in a circa 2.5-hour journey, said mainland media outlets.

The new rail lines are mentioned in a document called “Territorial Special Planning of Guangdong Province (2020 to 2035)”. The plan is subject to a period of public consultation running from February 10, to March 11.