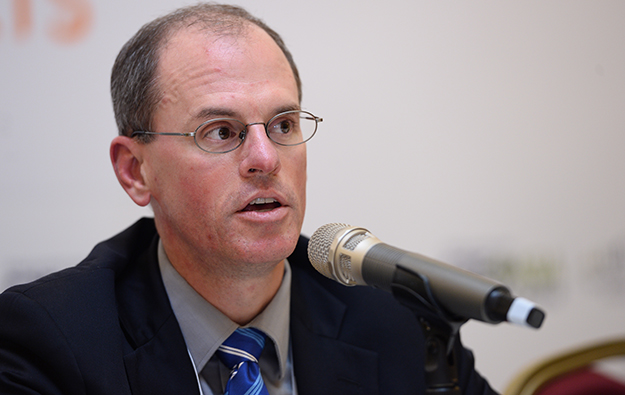 Scientific Games Corp reported an increase in global shipments of new gaming machines and higher sales of table products in the first quarter of 2017, as the firm continues to widen its offering.

“We are seeing the fruits of all of our R&D [research and development] investments,” said Derik Mooberry (pictured), Scientific Games group chief executive for gaming.

“Customers are responding well to how our products are performing in their casinos and that’s translating into sales and leases of a lot of our equipment,” Mr Mooberry told GGRAsia. He was speaking on the sidelines of Global Gaming Expo (G2E) Asia 2017, held in Macau from May 16 to 18.

Gaming machine sales revenue increased by 16.1 percent year-on-year to US$156.2 million in the first quarter. The company shipped 8,359 new gaming machines between January and March, including 5,862 new units shipped to North America customers and 2,497 units to international customers.

Revenue from sales of table products increased 15.8 percent year-on-year, to US$49.9 million in the first quarter of 2017.

“That’s a sign of good momentum, we are really starting to hit full stride and feel really good about the products that we have available,” said Mr Mooberry, referring to the quarterly results as a whole.

Scientific Games has also benefited in the quarter from its acquisition of Canadian gaming supplier DEQ Systems Corp. That deal – valued at CAD27.2 million (US$20.0 million) – closed in January this year.

“The acquisition of DEQ has been great. They have a couple of really strategic products: they’ve got some great progressive products for table games and the distribution agreement for the EZ Baccarat game,” said the Scientific Games executive.

“We are very pleased with that acquisition. The sales team has embraced those [DEQ] products and we now look at selling those at a global basis,” added Mr Mooberry.

Commenting on possible new acquisitions in the near term, Mr Mooberry said: “We look at strategic targets all the time and where we see a company that can help us add value to our portfolio – and ultimately to our shareholders – we look to see if it makes business sense.”

Most of Macau’s casino operators are likely to generate positive free cash flow in the first quarter, given the robust recovery level of mass-market gross gaming revenue (GGR) in January, relative... END_OF_DOCUMENT_TOKEN_TO_BE_REPLACED