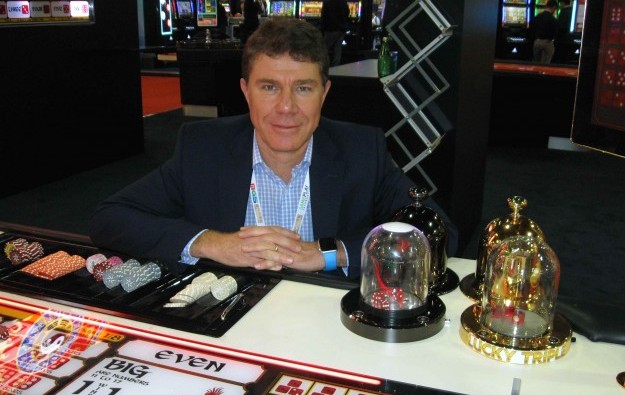 Asian gamblers like ‘physical’ – as opposed to digital – random number generators such as dice, but no one likes a mechanical dice shaker when it fails, says industry technology expert Simon Witty.

He said the firm’s Infinity sic bo dice shaker not only deals with that issue – by eliminating the parts moving against each other that are used in conventional dice shakers – but also offers a ‘rumble’ feature for the shaker, eliminating the bane in the life of every casino operator and every sic bo player. That is the risk of ‘cocked’ dice, a situation where dice land on top or against each other and are not sitting ‘face up’, thus creating a potential for a dispute between the player and the house.

“A cocked dice can be a big problem,” says Mr Witty. He was speaking to GGRAsia during the Macao Gaming Show 2015 at the Venetian Macao.

The Infinity sic bo dice shaker uses magnetism rather than mechanics to agitate the dice, so eliminating the risk of a mechanical failure in the shaker, and allowing the shaker to have a ‘rumble’ facility that will settle the dice during the act of shaking.

“Infinity does not use a solenoid. It has a linear actuator, which means there are no touching components. That means it’s a maintenance-free device,” explained Mr Witty.

“Dice shakers in a market like Macau are working 24/7. A solenoid is a physical device. They work until they fail, and when they fail it is a huge disruption for the house and for the player. Our product was designed purely around how to get round the problem of the solenoid component,” he explained.

He added: “An actuator is much like a speaker – it uses magnetism to ‘pop’ the shaker and move the dice. The dice shaker can ‘pop’ or it can ‘rumble’. A ‘pop’ gives a very strong bounce, or we can rumble the platform very gently, to try and settle the dice and avoid the issue of ‘cocked’ dice.”

In Asia, sic bo dice shakers have traditionally been operated with ‘cover on’ during the actual shaking process, so that bets could still be taken up to the point the cover was removed, said Mr Witty.

“I think the reason originally for ‘lid on’, was it allowed Asian players to place their bets after the result has occurred. So they have a feeling they are able to ‘influence’ the outcome in some way,” said the Paltronics executive.

“But now you are finding that more and more casino operators are tending to go ‘lid off’ because it can speed up the game, and the players can actually see the rumble. They tend to like to see that,” said Mr Witty.

Paltronics’ Infinity sic bo shaker can be sold as an individual unit, or teamed with the firm’s Clarity sic bo playing surface.

The decision by the Macau government to grant fresh 10-year licences to each of the city’s six incumbent casino operators has been welcome by top management at those firms. Each of the concessions... END_OF_DOCUMENT_TOKEN_TO_BE_REPLACED