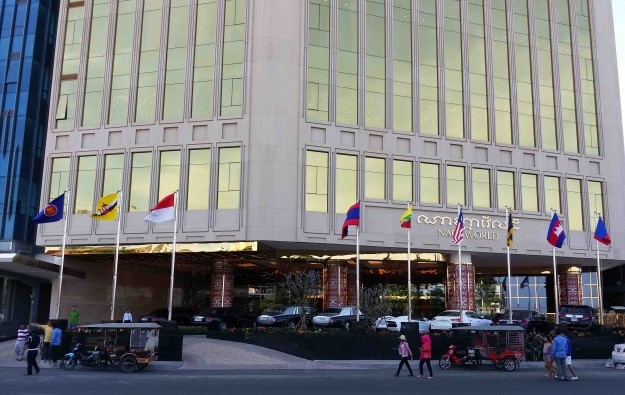 The temporary suspension of casino operations at the NagaWorld complex (pictured) in Cambodia from April to July as a safeguard against the spread of Covid-19 “will hurt earnings and credit metrics in 2020,” said Moody’s Investors Service Inc, in its latest scheduled review of the resort’s owner, Hong Kong-listed NagaCorp Ltd.

The review was issued on Thursday, and it did not involve any input from a Moody’s rating committee.

Moody’s said NagaCorp’s existing ‘B1’ rating was “constrained” by its single-site operation; “uncertainty around an implementation of a gaming tax” in Cambodia; and its “exposure to political risk and the evolving regulatory framework in Cambodia”.

NagaCorp has a long-licence monopoly on casino operations in the Cambodian capital Phnom Penh.

Moody’s said that NagaCorp was rated one notch above Cambodia’s sovereign rating, based on its “assessment that there is a low likelihood of the company being affected in the event of a weakening in Cambodia’s economic fundamentals”.

In other commentary issued on Wednesday, analyst John DeCree of Union Gaming Securities LLC said that a long-anticipated law in Cambodia to regulate casino business would – if enacted on terms that have emerged so far in media reports of comments by government officials – provide some clarity for investors in NagaCorp.

“We are encouraged to see the law advance out of the cabinet,” said Mr DeCree. “Notably, gaming tax rates are in line with our expectation, including VIP at 4 percent [of gross gaming revenue] and mass at 7 percent,” which would make Cambodia “one of the most favourable gaming tax regimes in the world”.

Currently, a number of flat taxes negotiated between the firm and the government are levied on NagaCorp’s gaming operations, according to company commentary.

“Official clarity” on the tax rates proposed under a gaming law, would be “a positive, as it removes the potential overhang of unfavourable taxation in the future,” said Union Gaming.

On July 19, NagaCorp said in a filing that it had been allowed by the Cambodian government to reopen “all of its casino businesses”, including mass market gaming tables, following the period of closure as a precaution against the spread of Covid-19.

NagaCorp had announced earlier this month that it had negotiated a deal with the Cambodian government under which the firm had been allowed from July 8 to reopen its VIP table games and slot machine business as part of that nation’s exit from Covid-19 countermeasures. In comments to GGRAsia on July 9, NagaCorp’s chairman Tim McNally said the reopening of the VIP and slot-machine businesses generated a “very positive public response”.

Union Gaming’s Mr DeCree stated: “Given the strong geopolitical relationship with China, Cambodia has received help from China in containing Covid-19, which has fostered an earlier recovery of inbound Chinese travel to Cambodia and Naga[World].”

The analyst added: “In fact, since some border restrictions began easing in May, Chinese nationals and expatriates began flocking back to Cambodia. While the rest of Asian gaming markets are still waiting for lock downs to be lifted or border restrictions to be eased, Naga has a head start on the road to recovery…”

In late June, NagaCorp had said it had increased the size of a planned issuance of senior notes to US$350 million, compared to US$300 million initially proposed. It stated the new notes were designed to provide it with fresh liquidity to make payments on existing notes and for general corporate purposes.