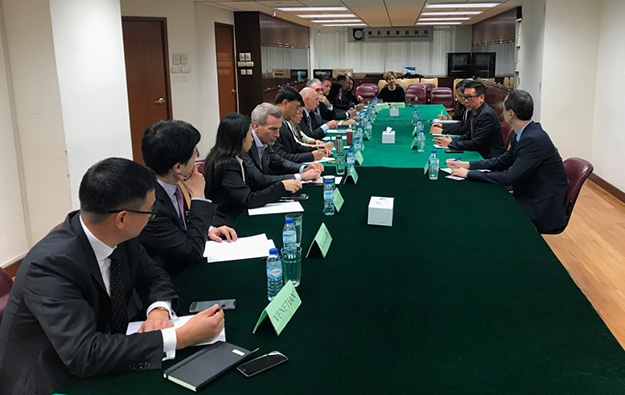 The Macau gaming regulator met on Wednesday with representatives from the city’s six casino operators. The meeting followed media reports in mainland China that Macau junket investor Suncity Group was involved in what was referred to in the news as “online gaming” and “proxy betting”.

In a separate meeting on the same day, the casino regulator met with representatives from local junket-sector trade bodies, to discuss the same topic. So said Macau’s Gaming Inspection and Coordination Bureau, also known by its Portuguese-language acronym DICJ, in a press release.

The regulator stated it had – during the meeting with the casino operator representatives (pictured) – urged firms to “strictly monitor” the operations of the junket operators they work with. DICJ stressed casino operators should ensure such junkets would not use casino operations in Macau to promote online or phone betting, both of which are illegal in the city.

The casino regulator additionally asked casino operators to meet with their partners in the junket sector, in order to remind them about the need to “strictly comply” with the relevant rules and regulations.

The press release by the casino regulator indirectly quoted director Paulo Martins Chan as stressing that online gaming was illegal in Macau. He added that the local government would not allow the city’s casino industry to be used for the promotion of online or phone betting.

On Wednesday, GGRAsia contacted all Macau’s six casino operators for their comment on the claims against Suncity Group, namely regarding allegations that through its promoted gaming venues in Macau, the brand had signed up mainland Chinese patrons for an online gaming application available outside of the city. By the time this story went online, only MGM China Holdings Ltd had replied.

“MGM strongly condemns and will not accept any illegal online gaming activities carried out, in or from any of our properties in Macau,” a company spokesperson said in a written reply.

In its meeting with representatives from local junket-sector trade bodies, the casino regulator stated the Macau government was paying close attention to operations run by local junkets, either in Macau or elsewhere. It added that any breach of the law – even if outside of Macau – could impact the junket’s suitability to hold a Macau licence.

The casino regulator had met on Tuesday with representatives of Macau junket investor Suncity Group. The casino regulator said the Tuesday gathering had been called in order better to “understand the situation” regarding the claims against the brand.

State-backed Economic Information Daily, an affiliate of Chinese official news agency Xinhua, said in a Monday report that it had contacted about “30 players” said to have used online gaming services associated with the Suncity brand. Privately-held Suncity Group hit back in a statement ssued on the same day as the report, saying it “strongly condemns” the Economic Information Daily report. The firm added the report was “false” and contained content that was “mostly conjectures,” the rebuttal added.