Rise of the casino robots? Not for now say experts 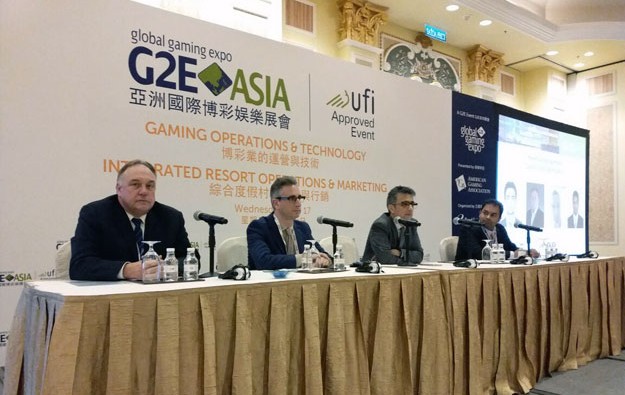 The question of whether the rising cost around the world of employing casino dealers might lead to the introduction of robotic ones in some markets was raised during a discussion panel at Global Gaming Expo (G2E) Asia 2017.

Mr Tash mentioned that in some markets dealer monthly salaries had risen 150 percent in a decade.

Already in regulated markets including Macau – where there is statistical full employment and a government cap on the number of live-dealer tables allowed in the market – there are table games with automated betting and bet settlement but a live dealer. Some manufacturers have also experimented with robotic arms for card dealing, and there have long been electronic table game products using dealer animations or digital avatars of dealers employing technology with varying degrees of sophistication.

Ken Jolly (pictured left), vice president for Asia at Scientific Games Corp, a company with a large portfolio of casino electronic table games (ETGs) and equipment for live dealer table games, told the audience that the idea of a robot dealer was unlikely to be popular with Asian players.

He stated: “Particularly in table games and particularly in this part of the world, we find that the Asian players like to play with a live dealer. Sure enough there might be some robots coming into some table games over time, but I can’t see it dominating the industry. Chinese players in particular like to think they can ‘beat’ the person that is dealing the game, or have some sort of control over the game … that’s my understanding.”

The discussion didn’t touch on the politics of replacing people with machines. In the Macau market, casino dealer jobs are reserved for those people possessing a Macau ID, and there have in the past been public rallies against even the idea that Macau’s six casino operators might cut the number of local people employed – even during China’s anti-corruption drive that investment analysts said contributed in 2014 to the 30.4 percent year-on-year decline in Macau casino gross gaming revenue.

“I don’t think robots will take over; not that there will be no role for them,” he told the panel audience.

“You have to remember the human factor. If you had a ‘super dealer’ who was able to deal at twice the speed of a human dealer; would it be enjoyable to play at that table? Could you really increase the number of hands per hour?… I think it would be exhausting. I don’t think that’s why people come and sit at the table to play, it’s a leisure activity,” Mr Cohen stated.

Varun Nayak (pictured right), senior vice president for gaming strategy at Tangam Systems Inc, a specialist in data analytics that works with the casino industry, said the question was not whether the technology did or would exist, but whether people wanted it.

“I think the technology already exists for robots to be dealers right now. I think the question is whether the market will accept it, and whether or not the [right] economics exist for whatever part of the market that chooses to accept robot dealers,” Mr Nayak stated.

Scientific Games’ Mr Jolly noted: “There are systems now where you can have a live dealer at certain times and then switch over after hours or in quieter times to virtual dealers, so you can mitigate costs by not having a dealer to front [the product]. But ETG is a market in particular that has grown in Macau. When you have one or two dealers dealing a few games and you have multiple numbers of terminals, that’s a major cost saving in labour. And I think you are going to see that particular segment of the market be developed further… [not just] roulette, baccarat and sic bo… [but also other] card-based games.”

Some Macau casinos visited by GGRAsia on Thursday, actually had tables that were closed, notwithstanding strong consumer demand during Chinese New Year (CNY). The reasons for some tables being... END_OF_DOCUMENT_TOKEN_TO_BE_REPLACED