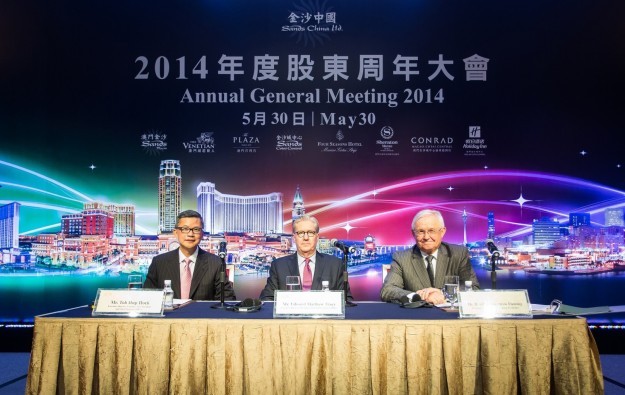 A senior executive of Las Vegas Sands Corp (LVS) was on Friday voted onto the board of Sands China Ltd by its shareholders.

Rob Goldstein has been president of global gaming operations for Sands China’s parent company LVS since January 2011, and executive vice president of LVS since July 2009 according to previous company announcements. He will hold a position as non-executive director of Sands China. His compensation package with LVS in 2013 was US$3.5 million according to company filings.

Mr Goldstein’s latest appointment was disclosed in a Sands China filing to the Hong Kong Stock Exchange. At the same time, Charles Forman, who has been a director of LVS since August 2004, was also voted onto the Sands China board as a non-executive director.

In March it was announced that two Sands China non-executive directors – William Lau Wong and Jeffrey Howard Schwartz – were due to retire at the annual general meeting on May 30 due to other business commitments.

The news came after an announcement on March 6 that Irwin A. Siegel, who had been on the parent LVS board since 2005, had decided not to seek re-election at its 2014 annual meeting. On March 9 Sands China said in a filing that Mr Siegel had also decided not to offer himself for re-election as one of its directors and was retiring, but had “no disagreement with the board”.

Sands China president and chief executive Edward Tracy (pictured centre) said in a statement after Friday’s announcement that the work of the retiring directors had been “crucial in helping guide Sands China during a period of rapid growth and success”.

Macau’s six casino operators have welcomed “the timely unveiling” of key aspects of a bill proposing a new regulatory system for gaming that will shape how the industry looks for years ahead.... END_OF_DOCUMENT_TOKEN_TO_BE_REPLACED