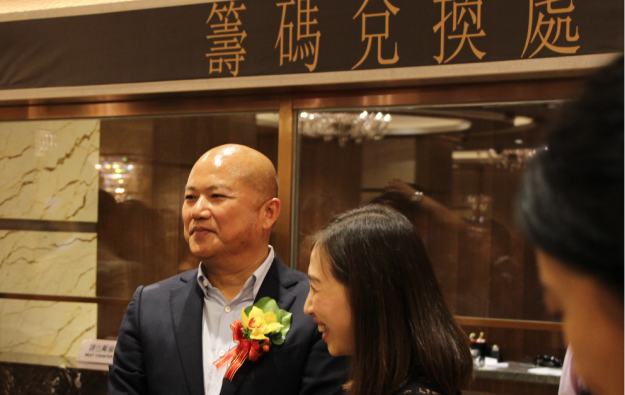 The Royal Dragon Casino and its hotel opened on Wednesday morning in the downtown district of Macau. The city’s gaming regulator confirmed to GGRAsia on Wednesday afternoon – via a phone call responding to our enquiry – that 20 gaming tables had been relocated from elsewhere in Macau to the new casino. It didn’t clarify from where.

GGRAsia additionally asked the local regulator – the Gaming Inspection and Coordination Bureau, also known by its Portuguese-language acronym DICJ – to clarify whether Royal Dragon counted as a “new” Macau casino, or was taking over the rights of an existing one. The gaming bureau didn’t elaborate on that point. It had previously confirmed to us that Royal Dragon Casino was operating under the licence of Macau operator SJM Holdings Ltd. That company has not commented on the matter, despite several requests by GGRAsia.

Chan Meng Kam (pictured), introduced during Wednesday’s opening ceremony as chairman of Hotel Royal Dragon, told local media that the casino tables in the new property were mass-market ones relocated from either the nearby Casino Golden Dragon – also run by Mr Chan – or other casinos of SJM Holdings. He didn’t identify which ones.

“The venue was designed to house 25 gaming tables. We are going to open first and will review the number of gaming tables later,” he said.

Mr Chan also revealed that the investment for the casino hotel was approximately MOP1.5 billion (US$186.5 million). A press release issued on the day said the facility had 144 hotel rooms designated of three-star standard.

Among the guests at the venue’s opening was Alvin Chau Cheok Wa, chairman of Macau VIP gaming investor Suncity Group.

Paulo Martins Chan, DICJ director, told local media as late as Tuesday morning this week that the authority was still processing the application to have gaming tables transferred to Royal Dragon Casino.

Early on Tuesday evening, online Chinese media outlet All About Macau posted a report saying the government had approved the relocation of 20 gaming tables to the new property.

During Wednesday’s launch, Royal Dragon’s Mr Chan was asked by local media to comment on what he thought should happen in the run up to when the concessions of the six current Macau operators expire on various dates in either 2020 or 2022. A number of investment analysts covering the Macau industry have suggested that early clarification from the Macau authorities on this topic would be helpful.

“There are only two to three years left until 2020. The government should pick up the speed to initiate, study the matter and make arrangements”, said Royal Dragon’s Mr Chan, adding the Macau government should consider increasing the number of gaming concessionaires in the future.

He stated: “I think [the Macau gaming market] should be opened further… The government should consider [how many gaming licences to add].”

But he added he was “not yet interested in” bidding for a standalone licence.