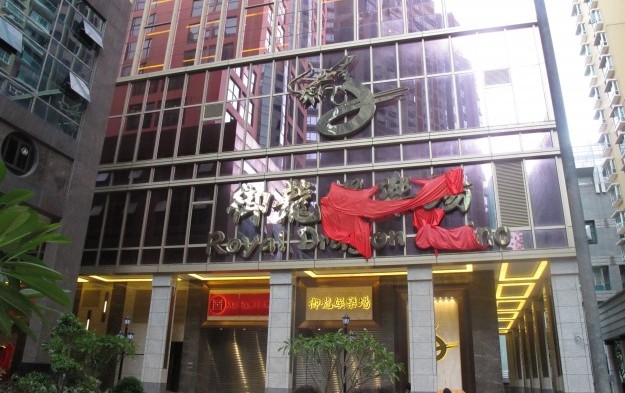 Royal Dragon Casino (pictured) and its hotel – a new gaming property in the downtown district of Macau peninsula – is scheduled to open at noon on Wednesday (September 27) just in time for China’s October Golden Week holiday, according to a document seen by GGRAsia.

The local gaming regulator did not confirm the date, but did tell us it had received an application to operate the venue under SJM Holdings Ltd’s gaming licence.

As recently as September 19, Paulo Martins Chan, the director of Macau’s casino regulator the Gaming Inspection and Coordination Bureau, said the body had yet to receive a request for the opening of the casino, which is located in a revamped commercial building near the Macao Polytechnic Institute.

On Friday GGRAsia emailed the gaming bureau, asking for confirmation regarding the opening date for the property, and for clarification regarding which existing Macau casino property and table allocation would be sacrificed in return for the right to run the new venue.

The gaming bureau’s Mr Chan had previously said that any operation at the Royal Dragon site could only be done via a transfer of gaming tables from another gaming venue and that there would be no new allocation of gaming tables under the framework of the Macau government’s table cap.

The gaming bureau said in a Friday email: “We have already received the application from SJM [Holdings] requesting to open a casino at the location you mentioned.  The gaming tables that SJM [Holdings] planned to place in the casino will be existing ones that are moved from its other casino properties.  The respective application is currently under processing and no official approval has been granted yet.”

GGRAsia also asked the gaming bureau to confirm how many tables would be in the new venue, but did not receive a reply on that point.

Chan Meng Kam, a veteran Macau businessman, is chairman of Hotel Royal Dragon (Macao) Co Ltd, the promoter of the new hotel property, according to official records seen by GGRAsia.

GGRAsia contacted Mr Chan several times regarding the new property but he declined to respond to questions about whether he or his businesses are connected to Royal Dragon Casino.

A sign previously seen on the Royal Dragon Casino building – for local slot parlour brand Mocha Clubs, part of Melco Resorts and Entertainment Ltd – was subsequently taken down. Melco Resorts declined to comment when approached by GGRAsia regarding the use of the Mocha Clubs sign.

China’s State Council has designated October 1 to 8 as a holiday period to mark China’s National Day on October 1 and the Mid-Autumn Festival, which this year falls on October 4. The festive period is commonly known in China as ‘Golden Week’.

Macau’s unemployment rate, and the resulting social pressure, could potentially result in “instability” regarding the city’s security, said the Office of the Secretary for Security in... END_OF_DOCUMENT_TOKEN_TO_BE_REPLACED