Russian operator plans to deal its cards in Primorye 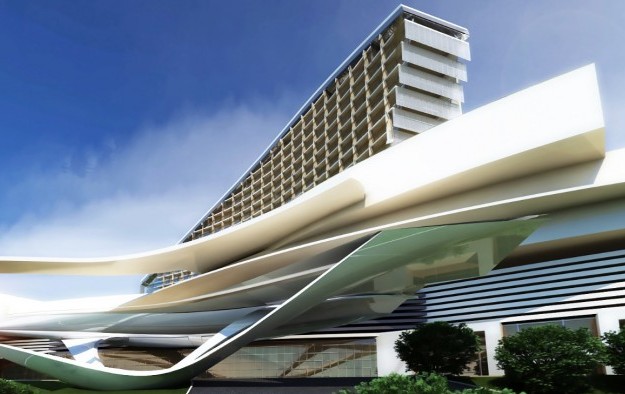 Russia-based Diamond Fortune Holdings Ltd says it has big plans for the Primorye Integrated Entertainment Zone, a casino development area located 50 kilometres (31 miles) from Russia’s Pacific port of Vladivostok. The firm aims to develop four casino resorts in the area, with the first due to open in 2018.

Once all its schemes are completed – involving a total investment of US$914 million – Diamond Fortune says it will be the casino operator with the largest footprint in Primorye.

“We want to get the biggest piece of the pie as we are sure that [Primorye] has all the chances to become one of the biggest [gaming markets in the world],” Grzegorz Esz, a partner and member of the board of Diamond Fortune, told GGRAsia.

Privately held Diamond Fortune was established in 2010. It is managed by a group of “Russian and Asian investors, professionals in the gambling business and international finance management,” according to the official website of Primorsky Krai Development Corp, a government-owned company overseeing the development of the Primorye Integrated Entertainment Zone.

Four licences have so far been granted for the development of casino resorts in Primorye, coupled with land grants totalling almost 1.4 million square metres (15.1 million sq feet). Mr Esz said that Diamond Fortune has been granted a total of 77 hectares covering several plots of land, making it the casino firm with the largest land bank in Primorye.

The overall Primorye Integrated Entertainment Zone covers 619 hectares, of which 263 hectares have been allocated for development in the initial stage of the project. The remaining land might be developed in later stages, according to Primorsky Krai Development.

The most recent publicly-available estimates of the revenue that Primorye could generate from gaming are several years old, and pre-date the anti-graft crackdown in China, a likely source market for customers.

Consultancy firm Global Market Advisors LLC worked on a feasibility study for Primorye in 2012. The company at the time estimated gaming there could reach about US$5.2 billion per year after 10 years of operations.

An estimated 400 million people live within a three-hour flight radius of Primorye. According to some reports, mainland China currently supplies around 80 percent of visitor arrivals, with tourists mainly coming from the neighbouring Heilongjiang, Jilin and Liaoning provinces in northeast China.

While Primorye’s proximity to northeast China provides a huge – and largely untapped source of players – any casino market that seeks to rely on mainland China punters faces risk, say some market observers. According to several investment analysts, the main reasons for Macau’s casino gross gaming revenue decreasing 34 percent year-on-year for the whole of 2015 were mainland China’s anti-corruption drive and its slowing economy.

Primorye can also tap into Russia’s domestic market. But the size – and potential – of this segment is not yet fully clear, said analysts contacted by GGRAsia.

Mr Galaviz added: “It also will have increasing flight connectivity over the years and reasonable accessibility to the airport. I think Vladivostok is a very interesting long-term tourism play and it is important for the Russian government to focus on keeping the infrastructure there new [and] updated.”

Starting in July, there will be direct flights from Shanghai to Primorye, according to media reports.

Mr Galaviz was closely involved as a consultant in the launch of the Primorye Integrated Entertainment Zone. He provided advice to the local authorities on developing a master plan for the area and regarding the launch of a request for concept process whereby casino operators were invited to present project ideas for Primorye.

“I foresee that Primorye will be a robust gaming centre but not to the level of Singapore or Macau,” he told GGRAsia. “It will be important for the government to establish a phase two investment exercise to ensure that the zone receives new domestic funding and new foreign investment moving forward.”

The Primorye authorities only charge a fixed monthly tax of RUB125,000 (US$1,894) per gaming table and RUB7,500 per slot machine, “leaving plenty of meat on the bone even when paying a competitive junket commission rate,” analyst Union Gaming analyst Grant Govertsen wrote in a March note.

Recent media reports in Russia have however hinted that the federal authorities could be considering changes to the tax system for the gaming industry. But in February the management at Primorye’s existing casino resort Tigre de Cristal told GGRAsia that any tax hikes would be at odds with Russia’s policy on encouraging regional investment via Integrated Entertainment Zones.

Dean Macomber, president of Macomber International Inc, a consultancy to the gaming industry, told GGRAsia in reference to Primorye and its location: “As a relative ‘island’ serving primarily fly-in feeder markets with a significant portion of the year subject to winter weather… it will be critically important for the integrated entertainment zone to succeed both on an individual casino basis and as a gaming destination.”

The number of visitors to the Primorsky region – referred to in Russian as Primorsky Krai – where the Primorye Integrated Entertainment Zone is located, typically declines sharply during the winter months. In January the mean daytime temperature in Primorsky’s administrative capital Vladivostok is -9 degrees Celsius, with mean night-time temperatures plummeting to -16 C. In the month of July, the mean monthly daytime temperature in Vladivostok is 23 C, according to the state-run Hydrometeorological Centre of Russia.

Mr Macomber – who has conducted research work on the Russian market – said is hard to forecast the performance of casino industry newcomer Diamond Fortune.

“It is unclear what are going to be the internal and external resources Diamond Fortune draws upon to conceptualise, open, operate and market their projects,” he stated. “Worldwide examples are plentiful indicating new casino entrants can perform below, at, and above average.”

Diamond Fortune’s Mr Esz said the firm’s plans include transforming Primorye into a leisure and entertainment destination. “In this regard our four resorts will provide wide variety of entertainment,” Mr Esz stated.

He added: “Each of our four projects is developed in collaboration with different world-leading consultants and designers, and each of [the] resorts will have its unique theme. Except gaming, visitors will be offered a wide variety of entertainment options.”

Selena World Resort and Casino (pictured in an artist’s rendering) is scheduled to be Diamond Fortune’s first project opening in Primorye. It will be developed in phases.

“We are targeting Phase 1 [of the first resort] to be opened in 2018,” Mr Esz said. “We have already started land works in order to finalise the foundations in the summer months, which will enable us to close the building frame before December 2016.”

Selena World will cover more than 300,000 sq ms and offer almost 1,300 hotel rooms, according to Diamond Fortune. Its casino will include 515 gaming tables and 2,590 slot machines.

The property will also have conference, spa and restaurant facilities. “Food and beverage will be at the core of our services given the importance of the culinary experience when travelling,” said Mr Esz.

Later this year, Diamond Fortune aims to begin construction on its second Primorye casino resort, named the Sun. It will be near a lake and include two hotel buildings with 900 rooms. The casino will have 376 gaming tables and 1,840 slot machines.

“We have already started landscaping and preparation works to lay the foundations for this resort. We are expecting to open this complex in 2019,” said Mr Esz.

In July 2009 the Russian government closed down all the then existing casinos and electronic casino game halls in the country. Then in 2010, it identified four specific casino gaming zones nationwide; Primorye was among them, along with Azov City in the Krasnodar region, Kaliningrad and Altai in Siberia. In 2014, Russia’s President Vladimir Putin signed a law allowing the establishment of additional gambling zones also in Sochi and Crimea.

Casino resort Tigre de Cristal was the first gaming property to enter the market in Primorye. It had a soft launch in October last year and an official one the following month.

The scheme opened with 121 hotel rooms and 321 slot machines, 33 mass tables and 35 VIP tables. A spa, karaoke bar facilities and a zone for “virtual golf” are currently under construction, and are due to be operational by next month, according to the investors.

The first phase of Tigre de Cristal had a capital budget of US$172 million. There is a commitment by Mr Ho and his partners for a second phase scheduled to open between late 2018 and early 2019.

Eric Landheer, director of corporate finance and strategy at Summit Ascent, last year told GGRAsia that the budget for the second phase was approximately US$500 million,

Tigre de Cristal’s initial results show an upward trend in rolling chip turnover since the property’s opening, according to Daiwa’s note. In March and April the venue recorded respective monthly rolling volume of more than HKD400 million (US$51.6 million) from HKD258 million in November 2015, the brokerage stated. But that still represents just a tiny fraction of Macau’s monthly rolling chip turnover.

Mass table drop at Tigre de Cristal has also increased since the property opened. It rose to around RUB400 million in February from under RUB300 million in October.

Gambling volumes are “expected to grow further as [Primorye] enters [the] summer months” with “a drastic increase” in tour groups from China, compared to the winter season, Daiwa added.

In its early months of operation, Tigre de Cristal reportedly offered commission rates – to those junket operators working at the property on a casual basis – of around 56 percent, according to Union Gaming. In Macau, due to the city’s 39 percent effective tax rate on GGR, offering a similar commission rate would result in a loss for casino operators.

Hong Kong-listed casino operator and developer NagaCorp Ltd is also investing in a casino resort in Primorye. The firm broke ground on the project at the end of May 2015. NagaCorp had previously stated – following the autumn 2013 announcement of its Russian investment agreement – that its resort would have 100 gaming tables, 500 electronic machines and a large theatre facility to accommodate 2,000 people as well as entertainment offerings such as a karaoke complex and spas.

Beside Diamond Fortune, another Russian group has pledged to invest in Primorye. Royal Time LLC has plans to build an integrated resort in the zone, with the working title ‘Phoenix’. According to a May 2015 statement from Primorsky Krai Development, the multi-stage development would involve a minimum investment of US$215 million on a land plot of 151,901 sq ms.

Phoenix’s first phase, including a 320-room hotel and casino, is scheduled to be open in late 2017.

Royal Time was founded in 2004 and has other gaming investments in Russia. The firm opened in 2010 the Oracle casino, located in Azov.

International casino operator Las Vegas Sands Corp has been ranked as the most sustainable firm in the global casino sector, according to the 2023 edition of the S&P Global Sustainability... END_OF_DOCUMENT_TOKEN_TO_BE_REPLACED