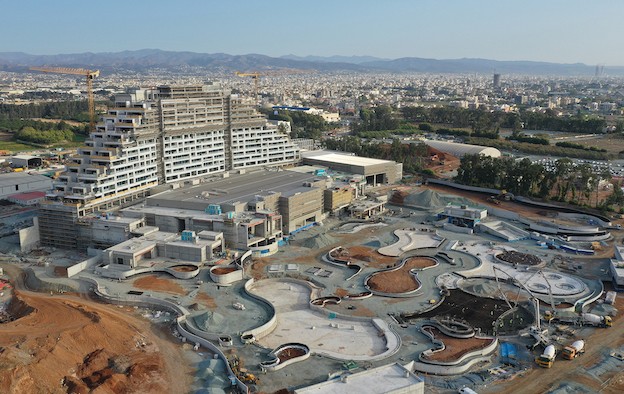 Western sanctions against the Russian economy and “certain entities and persons” linked to that nation, because of the “military conflict between Russia and Ukraine”, could have a “negative impact on our business,” said casino operator Melco Resorts and Entertainment Ltd in its annual report filed in the United States on Thursday.

Such impact could include the group’s “ability to accept certain customers, including for our business in Cyprus where historically a significant number of tourists have come from Russia,” added the report.

The group – which has its core operations in Macau, and also runs a gaming resort in Manila, the Philippine capital – is building a large new casino complex called City of Dreams Mediterranean (pictured in a file photo) at Limassol, in the Republic of Cyprus.

The resort was “on track” to open in the second half of 2022, the group said in the report.

Geoff Davis, chief financial officer for the group, said on the fourth-quarter earnings call, that Melco Resorts’capital expenditure for 2022 would be “about US$765 million,” with “about US$650 million of that” related to combined project spending on construction of City of Dreams Mediterranean in Cyprus, and on Studio City Phase 2 in Macau.

Melco Cyprus is a venture between Melco Resorts and Cyprus-based conglomerate Cyprus Phassouri (Zakaki) Ltd. The partnership has a 30-year exclusive licence for the jurisdiction. The venture is already running a temporary casino in Limassol under the branding “C2”. Under the terms of its licence it is also running satellite casinos in Nicosia, Ayia Napa and Paphos.

In the fourth quarter of 2021, the current Cyprus operation accounted for 5.5 percent of Melco Resorts’ adjusted earnings before interest, depreciation, taxation and amortisation (EBITDA), i.e., US$5.19-million of the group’s nearly US$93.97-million adjusted EBITDA for that quarter.

The Macau government hinted on Friday it might under the proposed update to the city’s gaming framework, permit some kind of performance-related system – linked to “turnover”... END_OF_DOCUMENT_TOKEN_TO_BE_REPLACED