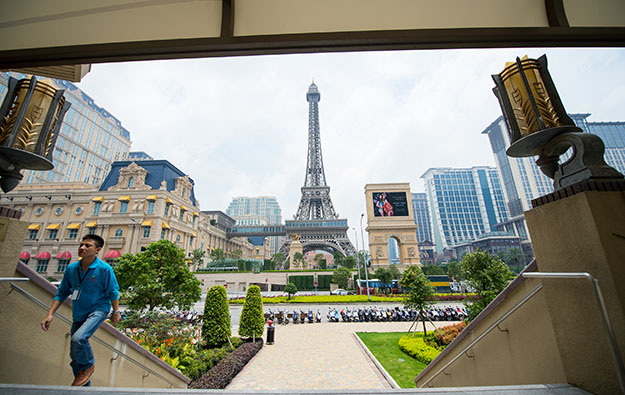 Macau casino operator Sands China Ltd says its adjusted property earnings before interest, taxation, depreciation and amortisation (EBITDA) more than doubled in the first three months of 2021 from the preceding quarter, mostly due to a rebound in premium-mass revenue.

The Macau unit of United States-based gaming group Las Vegas Sands Corp saw its adjusted property EBITDA hit US$100 million in the first quarter, compared to US$47 million in fourth-quarter 2020. The first-quarter figure was 49.3-percent higher than a year earlier.

Hong Kong-based analyst Andrew Lee of Jefferies LLC, said in a Thursday note that Sands China’s EBITDA had improved sequentially in the first quarter, to the “highest level since the pandemic started, and higher than both our and consensus estimates”.

First-quarter net revenues at Sands China fell by 4.5 percent year-on-year, to US$777 million, according to an earnings report released on Wednesday by the parent company. But the result was an increase of 15.1 percent from US$675 million in the fourth quarter of 2020.

Nonetheless, Sands China posted an aggregate loss of US$213 million in the first quarter of 2021, an improvement on the US$246-million loss in the preceding quarter. The result was however worse than the loss of US$166 million recorded a year earlier.

“Demand for our offerings from our customers who have been able to visit remains robust,” said Las Vegas Sands’ chairman and chief executive, Robert Goldstein, in prepared remarks included in the latest results.

In a presentation issued alongside the results, Sands China said that although visitor arrivals to Macau during the period were just at 16 percent of pre- Covid-19 pandemic levels, mass gaming revenue was already at 38 percent of the 2019 levels.

The casino operator saw its premium mass gross gaming revenue (GGR) increase 12 percent sequentially in the first quarter, to US$336 million, showed its presentation. According to Sands China, that was about 43 percent of first-quarter 2019 levels.

A Thursday note from analysts DS Kim, Derek Choi, Livy Lyu at JP Morgan Securities (Asia-Pacific) Ltd stated: “The management does not see negative spillover impact from the problematic VIP segment, and it remains confident to attract more high-end players – including those who previously played in VIP/junkets – into its direct and premium-mass programme, as has been the case so far.”

Most of Sands China’s casinos reported higher revenue in the period, compared to fourth-quarter 2020. The exception was the casino at the Parisian Macao resort (pictured), which posted revenue of US$59 million in the three months to March 31, compared to US$69 million in the previous quarter.

“We remain confident in the eventual recovery in travel and tourism spending across our markets,” said Mr Goldstein, “as greater volumes of visitors are eventually able to travel to Macau”.

The company saw in the first two weeks of March improved volumes of people visiting its properties – including the casinos – when compared to February’s Chinese New Year holiday period, said the firm’s president Wilfred Wong Ying Wai on March 23.

Group-wide capital expenditure in the first quarter was US$291 million, including construction, development and maintenance activities amounting to US$268 million in Macau, where the group has revamped and rebranded the Sands Cotai Central complex as the Londoner Macao.

The British-themed resort had its first-phase launch in early February, just ahead of Chinese New Year.

“We are fortunate that our financial strength supports our investment and capital expenditure programmes in both Macau and Singapore, as well as our pursuit of growth opportunities in new markets,” said Mr Goldstein.

Adjusted property EBITDA at Marina Bay Sands stood at US$144 million, unchanged from the three months ended December 31. It represented a year-on-year decline of 48.9 percent.

Las Vegas Sands announced in early March it had agreed to sell its Las Vegas, Nevada venues and operations for US$6.25 billion. The casino firm said it was “focused on reinvestment in Asia and high-growth opportunities in new markets.”

Mr Goldstein said in late January that he expects would-be bidders in the upcoming retender of gaming rights in Macau, will be required to commit to a “substantial capital investment”. Macau’s current six gaming licences expire in June 2022.

Deutsche Bank Securities Inc expects the year-on-year rate of decline in the fourth quarter for Macau’s casino gross gaming revenue (GGR) to moderate to 24.8 percent, at the equivalent of just... END_OF_DOCUMENT_TOKEN_TO_BE_REPLACED