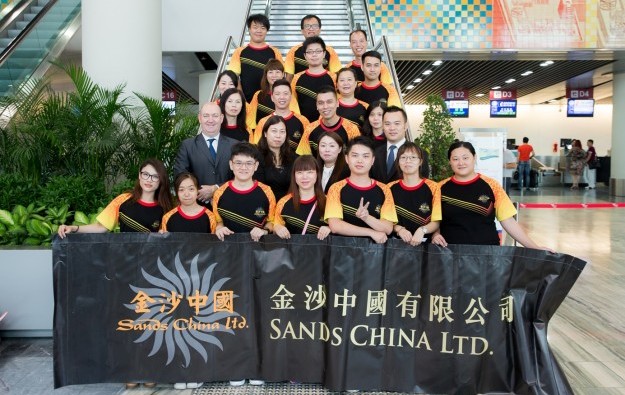 A group of 38 casino dealers from Macau employed by Sands China Ltd – one of that city’s six casino operators – flew to Singapore on Monday to spend 12 months on secondment at the Marina Bay Sands casino resort. They will work on the casino floor there, serving as dealers.

Marina Bay Sands was developed and is operated by Las Vegas Sands Corp, the parent company of Sands China. The property opened in April 2010.

“Over the course of 12 months, they will gain valuable overseas experience there, acquiring a global vision and broadening their career development horizons,” said Sands China in a press statement regarding the selected dealers’ short-term transfer to Singapore.

The firm added that a total of 43 Macau dealers would be involved in the secondment, which starts on September 1.

Sands China said the dealers had been selected after a near two-month selection process, including approval by the Singapore government.

In Macau, the government has a policy of reserving casino dealer jobs for Macau permanent residents.

The Singapore secondment of Sands China dealers – described as a voluntary programme – is said to be the latest initiative of the Sands China Academy, which seeks to train and develop the company’s team members, including Macau locals.

At the end of the 12-month period, the programme participants will return to their current positions at Sands China.

Macau recorded 965 “gaming-related” crimes in full-year 2022, down 29.7 percent on the 1,372 identified in the previous year, according to the latest statistics published on Tuesday by... END_OF_DOCUMENT_TOKEN_TO_BE_REPLACED