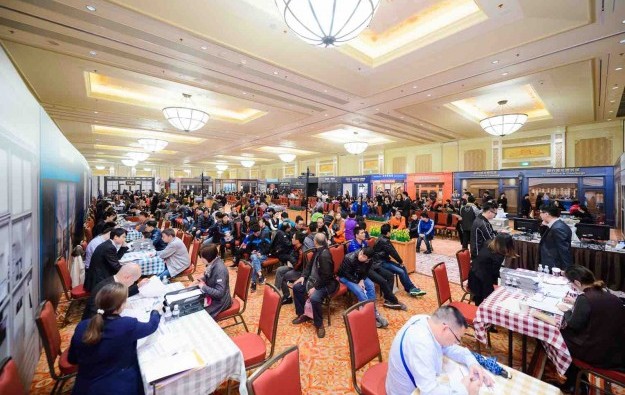 Macau-based casino operator Sands China Ltd has announced the hiring of more than 600 new employees for its Parisian Macao casino resort, under construction in Cotai.

The announcement was made on Thursday, following a recruitment fair for Macau locals (pictured) that took place earlier this week.

“As the number of locals in attendance was higher than expected, the event was extended for one additional day to interview all walk-in candidates who came during the first two days,” the firm said in a press release.

It added: “At the three-day recruitment fair, more than 600 contracts were signed on the spot.”

On a conference call with investment analysts in January, Sands China’s chairman and chief executive Sheldon Adelson said the firm was targeting a September opening for the Parisian Macao, and potentially a partial opening in the summer “if the opportunity arises”.

The US$2.7-billion Parisian Macao will have 3,000 hotel rooms, a casino, meeting space, retail, a theatre and a themed water park, according to Sands China. The property’s half-size replica of Eiffel Tower will feature a restaurant and observation decks.

“Sands China is very pleased at the turnout for our first large-scale recruitment fair for the Parisian Macao,” Antonio Ramirez, senior vice president of human resources for Sands China, said in a statement.

According to the firm, more than 95 percent of the vacancies available at the recruitment fair were for non-gaming positions. “Nonetheless, gaming positions remain a popular choice with locals, with half of the fair’s candidates coming in search of a gaming opening,” Sands China stated.

The company plans to conduct a second recruitment fair in June.

Earlier this month, Sands China announced a new “career development opportunity” for those of its gaming workers that posse a Macau ID. The scheme will allow them to move to non-gaming sectors. Participants in the programme will take new positions at Sands China properties, including at Parisian Macao.

Sands China said in its preliminary 2015 annual results announcement, published on February 19, that it had close to 27,000 employees, including gaming and non-gaming staff.

The decision by the Macau government to grant fresh 10-year licences to each of the city’s six incumbent casino operators has been welcome by top management at those firms. Each of the concessions... END_OF_DOCUMENT_TOKEN_TO_BE_REPLACED