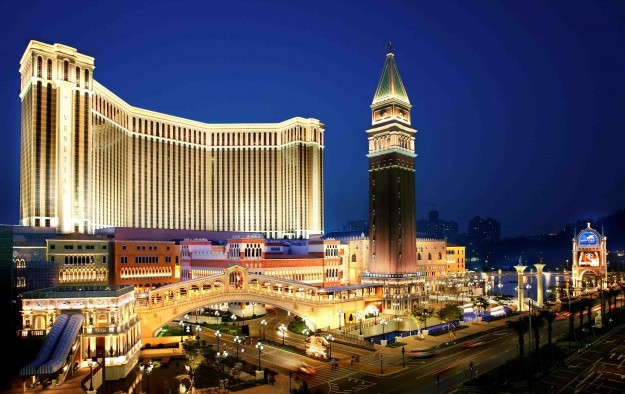 Sands China Ltd, the Macau casino operator controlled by Sheldon Adelson, in October regained top spot for monthly market share of gross gaming revenue (GGR). The operator of the Venetian Macao (pictured) accounted for 23.7 percent of Macau’s GGR last month, up from 21.8 percent in September, according to industry figures compiled by GGRAsia.

Mr Adelson said during the parent firm Las Vegas Sands Corp’s third quarter earnings call that growth in Macau’s mass-market gambling had made up for lower spending by high rollers in recent months. The firm last month reported adjusted property earnings before interest, taxation, depreciation and amortisation (EBITDA) of US$811.6 million in the third quarter of 2014, up by 3.3 percent from a year earlier.

SJM Holdings Ltd, the company founded by Stanley Ho Hung Sun, was second in the market in October, with a share of 23.4 percent of GGR. Galaxy Entertainment Group Ltd, which grabbed the market lead for the first time in September, saw its share drop to 21.4 percent in October, from 22.9 percent in the previous month.

Melco Crown Entertainment Ltd had a market share of 14.3 percent in October, up from 12.6 percent in September. Wynn Macau Ltd and MGM China Holdings Ltd had 8.9 percent and 8.2 percent respectively of October’s casino revenue.

The October GGR decline is the biggest year-on-year monthly drop since the Macau government started to issue GGR data in its current form in 2005.

Judged month-on-month, the October tally was up 9.6 percent on MOP25.56 billion achieved in September.

Analysts at Union Gaming Research Macau Ltd are now assuming that November and December will see GGR tallies similar in hard numbers terms to September’s aggregate. “We currently expect declines of 16 percent and 24 percent, respectively, to round out the year. This would result in total 2014 GGR down 2 percent to MOP355 billion (US$44.4 billion),” said the research house.

“Our current expectations of December being down 24 percent year-on-year include further disruption to the VIP segment owing to the expected visit of President Xi Jinping to Macau as part of the 15th anniversary celebration of the handover of Macau to China,” Union Gaming added.

Macau’s casino gross gaming revenue (GGR) for the first five days of February is estimated at MOP1.9 billion (US$235.1 million) – or MOP380 million per day – a level that suggests a “45... END_OF_DOCUMENT_TOKEN_TO_BE_REPLACED