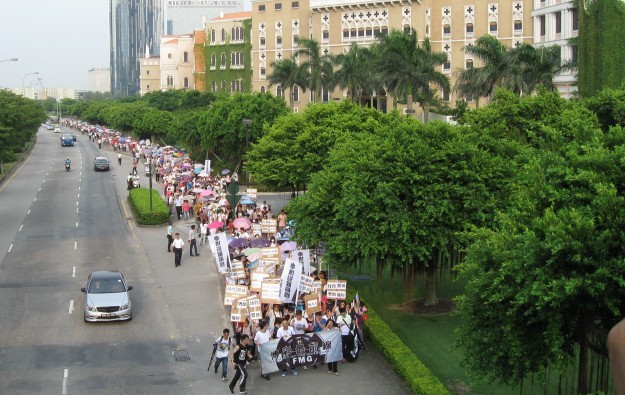 Macau casino operator Sands China Ltd on Wednesday night said it “regretted” the decision of a local labour group to stage a protest outside the firm’s Venetian Macao property.

A crowd estimated by police at the scene as containing 200 people – but by the organisers at 1,500 – on Wednesday afternoon held a two-and-a-half hours protest with speeches and a march around the approximately 2.8-kilometre (1.7-mile) perimeter of Sands China’s Venetian and Four Seasons site at Cotai. The police later revised the number to 900 people.

The reason, said the organiser of the event – Forefront of the Macao Gaming – was to put pressure on Sands China to amend its policies on promotion for casino dealers. There was also a call for the company to increase by approximately 10 percent across the board the pay of casino floor staff working on table games at the firm’s properties.

“Some people at Sands China are working as dealer supervisors but only getting dealer salaries,” Kelvin Leong, one of the organisers, told GGRAsia. “Our issue is only with Sands, not the other casinos [operators],” he added.

Sands China on Wednesday told GGRAsia that such a promotion scheme for acting supervisors was already company policy. It referred us to a statement the firm had issued on Monday, which said: “…effective August 1, qualified dealers will be promoted to pit supervisors”.

The firm said in a further statement on Wednesday: “Sands China regrets that an association has decided to stage a demonstration outside the Venetian Macao to voice the concerns and opinions of some of Macau’s gaming employees.”

On Monday, when news of the planned protest were first published, GGRAsia asked the association’s president Ieong Man Teng how many Sands China workers were represented by his group. Mr Ieong told us his association “does not have members” but acts as an umbrella organisation to lobby on behalf of workers.

The casino firm stated on Wednesday it had many ways for staff to communicate directly with the management.

But Kelvin Leong said yesterday: “Actually the management thinks it knows what Sands’ workers want, but actually we think what the workers are saying doesn’t get to the big bosses.”

Forefront of the Macao Gaming – a body registered as a local association – has developed a reputation for being able to mobilise street protests on single-issue questions. It helped to bring – by police estimates – at least 3,000 to the streets in October 2013. The organisers claimed 10,000. That event was to make clear locals’ opposition to having non-resident workers as casino dealers.

Demonstrator Choi Heng speaking at yesterday’s protest told GGRAsia: “Sands has been in Macau for 10 years and has made a lot of money. We think it should give better opportunities to its workers.” Mr Choi declined to say whether he was a Sands China employee.

It was not clear how many of all those taking part in Wednesday’s rally outside the Venetian Macao were Sands China employees. GGRAsia separately asked two of the people organising the event on the day what proportion of those involved worked for the company, but they were unable to provide numbers.

Several other participants approached by GGRAsia said they worked for other casino operators in the city, but supported the principle of the action.

One woman surnamed Chan, speaking through an interpreter, said: “It’s hot today. People are not here for a holiday walk. They are here because they feel they are not getting what they want by talking.”

At the end of Wednesday’s rally, the demonstration organisers handed to a Sands China representative what they said was a 5,000-signature petition calling for better pay and conditions at the firm. It is unclear how many of those who signed the petition are current company employees. Sands China had 28,237 team members as of December 31, 2013, according to the firm’s annual report.

Sands China said on Wednesday it was “noteworthy” that Sands China’s salary level and benefits schemes “are competitive in the marketplace and [the company] has proven track record in career advancement.”

It added: “The company believes that beyond improvements in the benefits scheme, it is equally important to provide occupational skill sets to our team members to help their careers move upward. In 2013 alone, over 875,000 training hours were organised for Sands China team members to participate in, with the company’s dedicated gaming training centre providing more than 2,420 training sessions for over 9,000 gaming team members.”

The casino company said that since the beginning of the year, “close to 10,000” local team members had received additional salary increments or promotions, including “over 70 percent” of those working in the table games department.

“Sands China will continue to listen to the opinions and feedback of its valued team members, in order to provide an ever-improving work environment and further growth opportunities,” said the firm.

The imminent return of package tours from mainland China will not only help boost Macau’s tourism businesses, but is also expected to help casinos gain more foot traffic in their mass gaming... END_OF_DOCUMENT_TOKEN_TO_BE_REPLACED