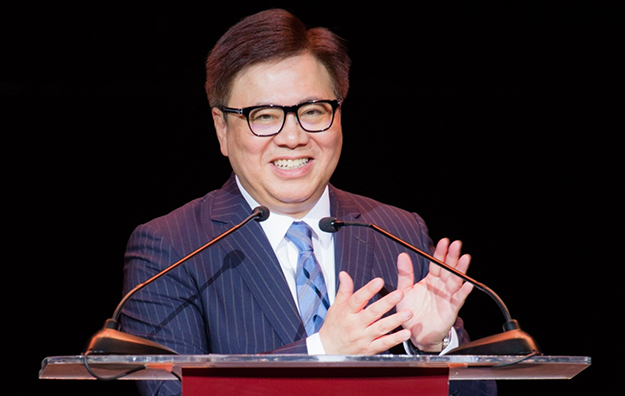 Macau-based casino operator Sands China Ltd expects a “stable” performance in gaming for the company for the rest of this year. The city’s VIP gaming segment has seen contraction in previous quarters this year and downsize risks remain for this sector according to some investment analysts.

The gaming performance of Sands China’s properties in Macau was “stable so far”, said the firm’s president Wilfred Wong Ying Wai (pictured in file photo) in comments to GGRAsia on Tuesday. He was speaking on the sidelines of the first day of MGS Entertainment Show.

“If you look at our third-quarter performance, we are very steady because our mass market is doing very well,” Mr Wong remarked to us.

The Sands China senior executive was also unfazed by the weak VIP gaming performance the industry is facing. “I think because we have this balance between mass and VIP, we’re okay,” Mr Wong said.

In a report published on Monday, credit ratings agency Fitch Ratings Inc highlighted the mass gaming segment had comprised “53 percent” of total gaming revenues in Macau for 2019 year to date – the first time mass’s contribution had exceeded that of the VIP gaming segment. Any further escalations in the trade tensions between China and U.S. could spell further pressure on Chinese business owners, an additional downsize risk to Macau’s VIP gaming segment, Fitch Ratings noted.

In his comment to GGRAsia, Mr Wong noted that his firm had already had a “soft opening” of the expanded suites at Four Seasons Macao for “testing guests’ feedback”.

Las Vegas Sands Corp – the parent firm of Sands China – had noted in its third-quarter earnings call presentation that Four Seasons Macao would see an expansion of room inventory with approximately 290 new luxury suites, ranging in size from 2,000 to 4,700 square feet. What was termed the grand opening of the revamped hotel was expected to take place “in first half of 2020”, according to Las Vegas Sands’ presentation.

The expanded Four Seasons Macao would also feature “one gaming floor”, with its mix of gaming products yet to be finalised, Mr Wong said. “But it’s definitely not junket,” he told us.

When asked on the expectation on any changes in gaming policy trends as the new Macau government will take over in December, Mr Wong remarked: “We’ll have to wait until the new Chief Executive comes on board. I’m sure every chief executive has his own priorities. We’ll work with him.”

Most of Macau’s casino operators are likely to generate positive free cash flow in the first quarter, given the robust recovery level of mass-market gross gaming revenue (GGR) in January, relative... END_OF_DOCUMENT_TOKEN_TO_BE_REPLACED