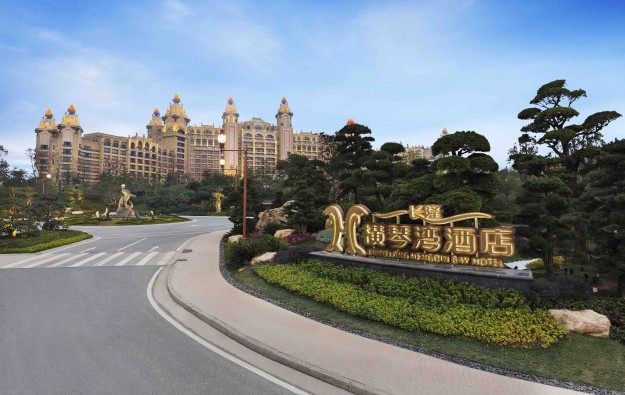 Macau casino operator Sands China Ltd announced on Wednesday what it describes as an “exclusive partnership” with a major non-gaming resort on neighbouring Hengqin Island in mainland China, to offer two-centre holiday packages.

The arrangement with Hengqin Chimelong International Ocean Resort (pictured) – a few minutes drive from Sands China’s Cotai Strip properties via the Lotus Bridge immigration checkpoint – is to be marketed by Sands China as the ‘Macao Hengqin Experience Package’.

Sands China said it was the first time it is collaborating with a resort in another city. The cooperation comes against a market-wide background of falling gaming revenue in Macau and a desire by the local and central governments to boost Macau’s non-gaming tourism.

Analysts have previously indicated that while price differentials between accommodation in Macau and Hengqin are smaller than they had first anticipated, they expected Hengqin Chimelong to appeal more to families and to non-gamblers.

The tie up is effective from Monday, March 2. Either Sands China’s Venetian Macao or its Holiday Inn Macao property will provide the Macau leg of the accommodation; depending on the customers’ choice of package.

Brendon Elliott, head of sales and resorts marketing at Sands China, said the company was “thrilled to build this exclusive partnership” with Hengqin Chimelong. “We hope that this collaboration between our two destinations will be the first of many as it provides a richer and more diversified experience for our customers,” he added in a prepared statement.

On November 20, the Macau government announced that the Lotus Bridge checkpoint was to start round-the-clock operation from December 18 that year.