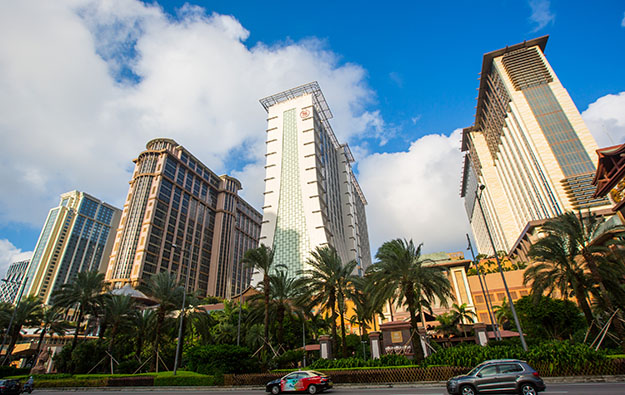 Las Vegas Sands Corp, the parent company of Macau-based casino operator Sands China Ltd, announced on Wednesday that it will be investing US$1.1 billion in Macau over the next three years. The bulk of that investment – approximately US$700 million – will be used for rebranding the Sands Cotai Central property (pictured) into The Londoner Macao, said Las Vegas Sands.

“The Londoner Macao will feature dynamic new attractions and features from London including some of London’s most recognisable landmarks, an expanded and reimagined retail mall and 350 luxurious new suites, the St. Regis Tower Suites,” said Sheldon Adelson, chairman and chief executive of Las Vegas Sands, during a conference call to announce the third quarter financial results.

Mr Adelson had flagged at the launch of his French-themed casino resort the Parisian Macao in September last year, that his firm was also interested in developing a venue themed around iconic buildings of the British capital.

The company said on Wednesday it would additionally be investing about US$250 million in converting the Four Seasons Residence tower into a 295-suite hotel. The tower had originally been conceived as an apartment hotel whereby the company would be able to sell property title to investors.

Both projects will start in the second quarter of 2018 and take about “18 to 24 months” to be completed, said Mr Adelson.

“Sands Cotai Central has performed very well in the premium mass segment because of the 6,000 sleeping rooms but we think it underperformers in the base mass segment, where the highest margins reside,” said Robert Goldstein, president and chief operating officer of Las Vegas Sands, on a conference call with analysts following the third quarter results announcement.

“We believe we can grow base gaming [with the revamp of Sands Cotai Central. There's adequate capacity in that building for more gaming on the on the base mass side – the highest margin business in Macau – and that's our particular advantage in both the Venetian [Macao] and the Parisian [Macao],” added Mr Goldstein.

The executive further clarified: “We’ll take the new St. Regis suites and redo those, and we’ll leave alone the Conrad and the Sheraton. We’re going to redo the entire Holiday Inn facility and redo the façade of the building.”

“The renovations will likely cause some disruption over the next two years, but in the long run should be value additive to the company,” said brokerage Sanford C. Bernstein Ltd in a note on Thursday.

“However, dividend growth may be limited over next few years as free cash flow is redirected to capex [capital expenditure],” wrote analysts Vitaly Umansky, Zhen Gong and Cathy Huang.

On Wednesday, the U.S.-based casino operator reported an increase in company-wide third quarter revenue, on what it said was a strong performance from its Macau unit, mainly because of an increase in business at the Parisian Macao.

Operating income in the third quarter increased by 18.9 percent from the prior-year quarter, to US$856 million. The company said the full quarter of operations for the Parisian Macao and stronger results at Marina Bay Sands contributed to the increase in operating income in the three months to September 30. The results for the third quarter of 2016 included only 18 days of operation of the Parisian Macao, a property that opened on September 13.

In Singapore, where Las Vegas Sands developed and operates the Marina Bay Sands, adjusted property EBITDA was US$390.7 million in the third quarter, up by 13.0 percent from a year earlier.

Net revenue at Marina Bay Sands increased 4.1 percent year-on-year to US$793 million in the three months to September 30, with casino revenue up by 6.3 percent, to US$629 million.

The Macau portfolio generated US$652 million in adjusted property EBITDA, an increase of 3.8 percent over the same quarter last year, said the parent company.

Banking group Morgan Stanley said the better-than-expected performance of the Parisian Macao was one of the surprises during the third-quarter results announcement. But the institution added that the Parisian Macao’s stronger performance suggested there had been some cannibalisation of the business at other Sands China properties.

Other properties of Sands China’s portfolio – Four Seasons Hotel Macao and Plaza Casino; and Sands Macao – reported a decline in net revenues, mainly due to a decrease in casino revenue.

Macau’s annual Gaming Service Index survey of casino resort staff performance shows that the overall index in the fourth quarter of 2021 stood at the same level as the same period in 2020. But the... END_OF_DOCUMENT_TOKEN_TO_BE_REPLACED