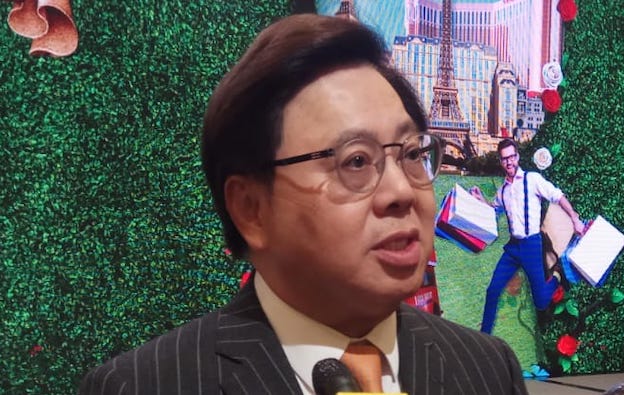 The Londoner Court is a 370-suite hotel facility on the site of the Londoner Macao, a revamped and rebranded version of the former Sands Cotai Central.

The Londoner Macao had its first-phase launch on February 8, ahead of the Chinese New Year break. The casino resort complex included a rebranded “Londoner Hotel”, with 600 suites, which has already been opened to paying customers on January 22.

Speaking to local press on Tuesday, the Sands China boss said that the Londoner Court is now undergoing its government licensing process. The eventual start date of its trial operation and official launch would be subject to that, as well as demand from customers.

“What we want to do is to launch it [Londoner Court] in phases: if the patrons are coming in a large number, we could launch it faster; if it is not, we could launch it at a slower pace,” said Mr Wong, on the sidelines of his company’s press conference on the Sands Shopping Carnival.

He added: “We hope to start launching it [Londoner Court] before the October 1 Golden Week.”

The October Golden Week is an annual weeklong break surrounding China’s National Day, which the country’s State Council has designated the first seven days of October as this year’s National Day holiday.

Other facilities within The Londoner Macao complex would also be launched in phases this year, Mr Wong mentioned.

“Of the whole Londoner, the last to complete would be the façade, and a new arena with about 6,000 seats…” the Sands China president said, noting that his firm has expected to launch the arena by January next year.

“For the whole façade [of The Londoner Macao]…hopefully it will be ready by the end of this year,” Mr Wong added.

The Sands China president remarked that the Londoner Macao, since its launch in early February, achieved “terrific” performance, in terms of its hotel occupancy and retail customer traffic. Hotel occupancy there ranked highest among the firm’s Macau properties.

Mr Wong also remarked that his firm had seen a “great” May Day break, when the firm’s hotel properties had an average occupancy of “over 90 percent” for May 1 to May 5. The casino operator has also observed a “very good recovery” in premium mass gambling, he said.

Despite the gradual recovery seen in the firm’s Macau operations, Sands China is for now maintaining its voluntary non-paid leave scheme for its employees, in the form of a so-called “care leave” programme, Mr Wong noted to the local media.

For the city’s gaming industry, “care leave” is one of several special-leave options offered whereby gaming employees can apply to take one unpaid day off a voluntary basis, with the entitlement to one day of additional paid leave.

But Mr Wong noted to reporters that his firm currently had no plan to launch any voluntary exit scheme for its working employees.

Some Macau casinos visited by GGRAsia on Thursday, actually had tables that were closed, notwithstanding strong consumer demand during Chinese New Year (CNY). The reasons for some tables being... END_OF_DOCUMENT_TOKEN_TO_BE_REPLACED