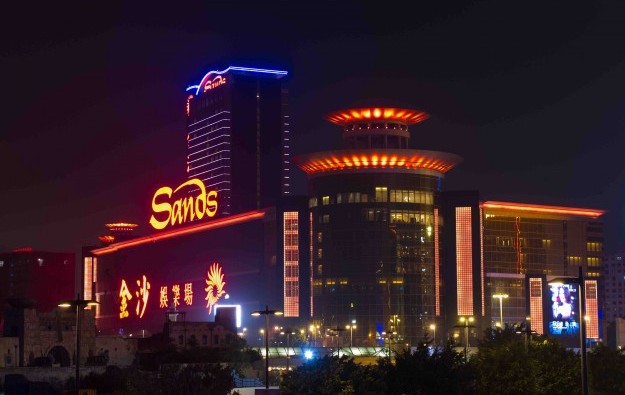 Union Gaming Research LLC said in a note on Monday that Las Vegas Sands Corp, parent of Macau casino operator Sands China Ltd, has been linked with a move to redevelop the existing Sands Macao (pictured) “into a mall/hotel complex on the [Macau] peninsula while reallocating table capacity to The Parisian”.

The latter is a reference to the firm’s current US$2.7-billion Cotai construction project. It will have a scale replica of the Eiffel Tower and other French-themed attractions.

Las Vegas Sands has said previously that The Parisian will have capacity for up to 450 gaming tables and 2,500 slot machines and electronic table games. But the Macau government’s policy of a cap of three percent annual compound growth on the number of live dealer tables in the market, from a base of 5,485 at the end of the fourth quarter 2012 – reaffirmed last week by the city’s government – has cast some uncertainty on how many tables all of Macau’s six operators will get for their under-construction new Cotai projects.

Robert Goldstein, president and chief operating officer of Las Vegas Sands and currently interim president and executive director at Sands China, said during the parent’s fourth quarter 2014 earnings call in January: “We do hope the government will honour our request for the [gaming] tables at The Parisian.”

Sources close to local officials have acknowledged the existence of rumours – dating back to at least 2013 – that Sands China might be interested in making some significant changes to Sands Macao, GGRAsia understands. Currently the unit has a casino and hotel but no shopping mall. The property – the first to be built in Macau by Las Vegas Sands’ local unit – celebrated its 10th anniversary of operation last year.

“We would expect an update on the timing of the Parisian and further colour around [Las Vegas Sands and Sands China] chairman Sheldon Adelson’s comments in Macau recently, requesting 2,200 [sic] more rooms for a non-gaming facility. We wonder if this is in conjunction with comments in the past about potentially redeveloping the existing Sands Macao into a mall/hotel complex on the peninsula while reallocating table capacity to the Parisian,” wrote U.S.-based Union Gaming analysts Christopher Jones and John DeCree in a note about Sands China’s parent firm Las Vegas Sands.

GGRAsia has approached Sands China for a comment on whether any changes are or have been contemplated for the Sands Macao site. No reply was available at the time this story was published.

On Friday, online portal MacauNews – crediting local media sources – reported that Mr Adelson on Thursday at a public event in the city stated he had submitted an application to the Macau government to build a 2,500-room “non-gaming project”. The reports didn’t specify a location for such a project. Sands China told GGRAsia by email that it had no additional comment on that issue.

Referring to any potential addition to Sands China’s hotel capacity in Macau, Union Gaming Research added: “Such a move would certainly be viewed positively in light of continued government pressure to diversify the economy.”

The idea of moving gaming tables from an existing Macau property to stock or partially stock a new venue – as described in Union Gaming Research’s note – has a precedent.

In July 2012, Mr Adelson said on Las Vegas Sands’ second quarter earnings call for that year that due to Macau’s table cap Sands China was moving tables from its existing properties to help populate what it described as “Phase IIA” of its Sands Cotai Central project on Cotai, which opened in September that year.

“We’ll need to take tables from elsewhere to get up to 200 tables for Sands Cotai Central phase two,” he told analysts at the time.

Galaxy Entertainment Group Ltd and Melco Crown Entertainment Ltd may soon face the possibility of doing something similar to Sands China’s 2012 exercise if they are to fulfil promptly their aspirations for having 400-plus tables each for their new properties opening in Cotai this year.

Macau officials have previously indicated that the three percent annual compound growth need not be delivered in same-size annual installments but could be timed to meet – as far as possible – the needs of the operators. There were a total of 5,704 tables in the market at the end of the first quarter 2015, according to data released last week by the Macau regulator the Gaming Inspection and Coordination Bureau.

There are also some contractual obligations linked to table count for at least one new Cotai scheme. GGRAsia reported last week that Melco Crown could potentially be in default on an approximately HKD10.86-billion (US$1.4-billion) project loan for its Studio City venue on Cotai if it is unable to open to the public its majority-owned Cotai casino resort by October 2016 “with a minimum 400 gaming tables available for operation”. The US$3.2-billion Studio City is due to open in the third quarter of 2015 according to company statements.

There could potentially also be implications for rates of return on invested capital (ROIC) for new supply in the demand-constrained market currently seen in Macau. Gross gaming revenue (GGR) fell 37 percent year-on-year in the first quarter according to government data published on April 1.

UBS AG analysts Anthony Wong and Angus Chan said in a note on April 10 that based on the bank’s estimate of a 21 percent decline in Macau’s 2015 gross gaming revenue, the sector would need “an 8 percent GGR CAGR [compound annual growth rate] in 2016/17/18 for new projects to achieve circa 15 percent incremental EBITDA [earnings before interest, taxation, depreciation and amortisation] ROIC by 2018E.” UBS added that would also assume no growth in existing Macau properties.

International casino operator Las Vegas Sands Corp has been ranked as the most sustainable firm in the global casino sector, according to the 2023 edition of the S&P Global Sustainability... END_OF_DOCUMENT_TOKEN_TO_BE_REPLACED