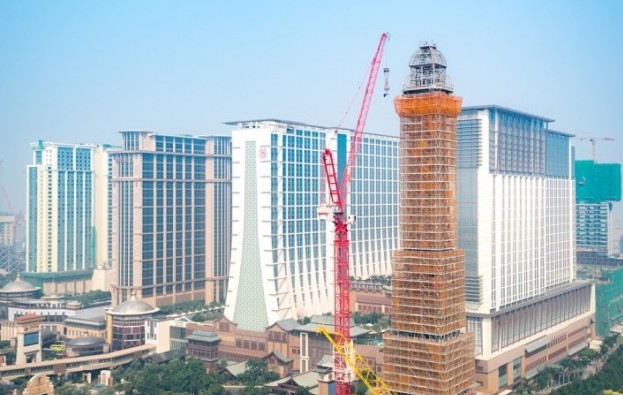 Macau-based casino operator Sands China Ltd on Thursday topped out the Eiffel Tower replica at the Parisian Macao. The company said the US$2.7 billion French-themed casino resort remains on track to open in the second half of 2016.

“The Parisian Macao, and in particular its Eiffel Tower, is certain to be a landmark presence on the Cotai Strip,” said Wilfred Wong, president and chief operating officer designate for Sands China. He will officially start working for the firm on November 1.

Mr Wong added: “[The Parisian Macao] is part of Sands China’s commitment to tourism diversification in Macau, and it’s the company’s contribution toward supporting Macau’s growth as a world centre of tourism and leisure.”

Rob Goldstein, president and chief operating officer of Las Vegas Sands Corp, the parent of Sands China, said in July that the Parisian Macao would “probably going to have an opening in about 12 months.”

The property’s Eiffel Tower is made of steel instead of the original’s wrought iron. The structure will also include a restaurant and observation decks, and a light show will be held each night, Sands China said in a press release.

The height of the Eiffel Tower replica is roughly equivalent to a 38-storey building and is approximately half the height of the 324-metre-tall (1,063 feet) Paris tower, the firm stated.

The Parisian Macao will feature 3,000 hotel rooms and a casino. Other facilities include meeting space, retail stores and restaurants. There will be a theatre, spa, children’s club and gym. A pool deck will include Aquaworld, a themed water park for all ages, the company said.

Las Vegas Sands is scheduled to announce its financial results for the third quarter on October 21. These are expected to be negatively impacted by the operations in Macau, suggest investment analysts.