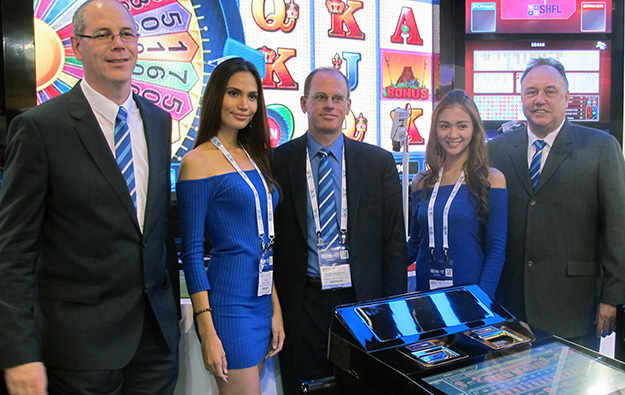 In a rapidly-evolving global casino industry, large-scale suppliers are at an advantage over smaller ones, says a trio of executives from U.S.–based casino equipment and lottery services firm Scientific Games Corp.

“We are a global company. We have some unique capabilities that many others don’t have because of our size, with nearly 8,000 employees worldwide, with development centres literally all around the world,” said Derik Mooberry (pictured, centre), executive vice president and group chief executive of gaming at Scientific Games.

Between 2013 and 2014, Scientific Games was involved in a series of acquisitions of rival gaming equipment suppliers. In 2013 it had bought Chicago-based slot machine maker WMS Industries Inc for US$1.5 billion. In November 2014, Scientific Games completed a US$5.1-billion deal to acquire Bally Technologies Inc. A year earlier, Bally Technologies had itself taken over Nevada-based SHFL entertainment Inc in a US$1.3-billion transaction.

“The vision behind the integration of all these companies was to create a portfolio of products that would allow customers to come and pick from an array of different solutions,” Mr Mooberry told GGRAsia during Global Gaming Expo (G2E) Asia 2016, a casino industry trade show held in Macau in May.

Overall, 2013 and 2014 saw a series of merger and acquisition deals in the casino equipment supply sector, marking a period of major realignment and consolidation in the industry. That included a multi-billion dollar deal involving the merger of Italy-based lottery supplier GTech SpA with U.S.-based gaming supplier International Game Technology (IGT).

The growth of Scientific Games’ portfolio and capacities via the acquisitions of Bally Technologies and WMS brought a “massive change” to the way the firm approaches the market, explained Adrian Halpenny, senior vice president of Scientific Games Australasia (pictured, left).

“The content pipelines that we have coming from the SHFL, from the Bally and from the WMS studio streams have really assisted us to become a major player in all markets around the world, but particularly Asia,” he told GGRAsia.

Mr Mooberry noted that, as a global company, Scientific Games remained a believer in the need to “have a very targeted strategy to [offer] market specific content to each area of the world that we do business in.”

He added: “We have learned that there are benefits of building market specific content. The players here in Asia are not the same [as]… in the United States, or in Europe or in Latin America. They do have a different profile than you would see in other markets, and our size and capabilities really lends to the fact we can build market specific content.”

During G2E Asia 2016, Scientific Games displayed several of its latest products for Asia. “We are in a good position with our product portfolio at the moment. We are going well,” commented Ken Jolly (pictured, right), company senior vice president and general manager for Asia.

Among the products on display at Scientific Games’ booth was the new Dualos cabinet, featuring dual 23-inch (58-centimetre) high-definition screens, integrated ambient lighting and an 18.5-inch digital topper. Dualos is compatible with content from the Bally Technologies, SHFL and WMS brands.