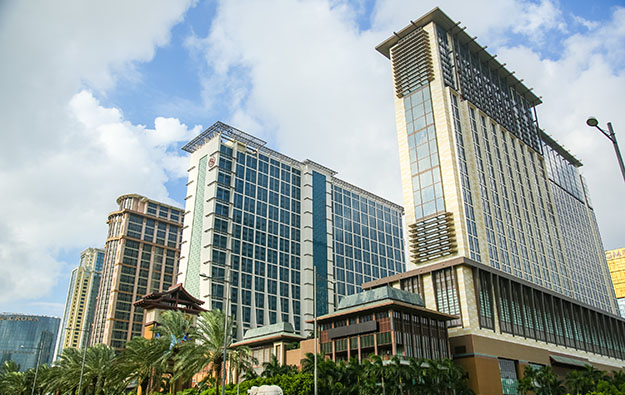 “We are… concerned that the level of disruption in 2018 and 2019 could be higher than expected,” the Nomura analysts wrote in a note on Wednesday.

They added: “The long-term strategy is sound, but Sands Cotai Central (pictured) already has limited space and limited access so adding cranes, jackhammers and scaffolding would not be great for the guest experience. If Las Vegas Sands Corp proceeds, then we see downside risk to 2018-19 consensus estimates in Macau. If it does not, then near-term earnings before interest, taxation, depreciation and amortisation [EBITDA] grows, but the risk of Sands Cotai Central’s obsolescence rises longer term.”

Las Vegas Sands, the parent company of Sands China, announced last week it would be rebranding Sands Cotai Central into The Londoner Macao.

Nomura said in its Wednesday note that the developable area in the Sands Cotai Central plot was already mostly occupied. “Even the frontage, where Las Vegas Sands could erect a mini Big Ben and the Tower Bridge, is tight.”

The Big Ben clock tower and the Tower Bridge are two of the most iconic tourist attractions in London.

The Nomura team added: “Imagine the construction equipment, scaffolding and hundreds of workers on-site from 8am to 8pm, all competing for space with customers entering the building. The outside issues are just the beginning. Re-theming the interior could be just as, if not more, disruptive to guests and players.”

Nomura noted that since MGM Resorts International began “its comparable external/internal renovation” of the Monte Carlo casino resort in Las Vegas, the property’s EBITDA “has fallen 25 percent”. If Sands Cotai Central were to decline as much, “we estimate the potential hit to EBITDA would be US$100 million to US$150 million for 18 months to 24 months,” the Japanese brokerage estimated.

Nomura said the question for Sands China and its parent company was whether already to undertake this “lengthy and disruptive” renovation. “By proceeding, Las Vegas Sands addresses the competitive shortfalls of Sands Cotai Central sooner than later,” the brokerage said. “Longer term… Sands Cotai Central likely would continue to lose share to newer, more compelling product, and three to five years from now it would be left in the same place: i.e., the need to renovate the buildings’ exterior and interior.”

Macau’s Court of Final Appeal announced on Monday sentences in relation to a total of nine cases concerning debt claims involving junket operators based at local casinos. In all the cases, the... END_OF_DOCUMENT_TOKEN_TO_BE_REPLACED