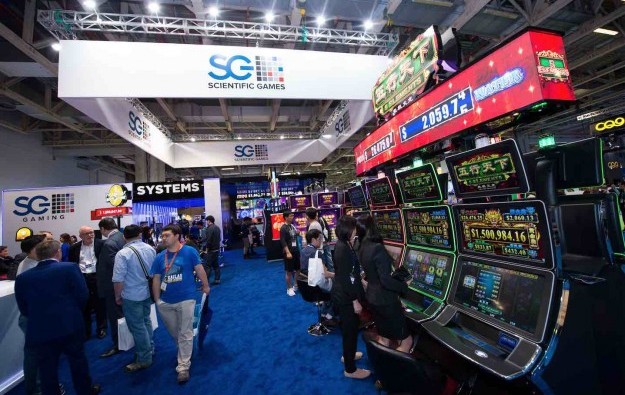 U.S.-based Scientific Games Corp on Monday reported second quarter revenue of US$766.3 million, up by 5.1 percent from the prior-year period and above market expectations. The casino equipment maker and lottery services provider said the revenue growth was driven by its gaming and interactive segments.

The company’s operating income in the three months to June 30 doubled to US$117.3 million. Such increase reflected “revenue growth, a more effective organisational structure and lower depreciation and amortisation,” Scientific Games said in a press release.

“Second quarter results represent our seventh quarter of consecutive year-over-year growth, including US$169 million of cash flow from operating activities, as a result of ongoing improvements in our gaming, lottery and interactive operations,” said Kevin Sheehan, the firm’s chief executive, in a prepared statement.

“We achieved year-over-year revenue growth in global gaming machine sales, gaming systems, table products and interactive; as well as in U.S. instant games revenue,” he added. “As a result of our improving organisational structure, we increased our attributable EBITDA margin by 270 basis points.”

Scientific Games’ share price surged on the back of the strong second-quarter earnings. After closing at US$26.85 last Friday, the company’s share price rose to close at US$34.15 on Monday, up nearly 27.2 percent.

Analysts Carlo Santarelli and Danny Valoy said Scientific Games’ revenue for the period was above the bank’s estimate of US$727.7 million and market consensus of US$736.2 million. Attributable EBITDA came in above the institution’s US$285.3-million forecast and above the market’s consensus figure of US$288.9 million, they added.

Scientific Games nonetheless reported a net loss of US$39.1 million for the second quarter, down from US$51.7 million in the prior-year period. The company recorded a US$14.1-million decrease in net interest expense, partially offset by a US$26.0-million increase in its provision for income tax.

Gaming machine sales revenue increased by 5.8 percent year-on-year to US$163.3 million in the second quarter. The company shipped 7,778 new gaming machines between April and June, including 4,367 new units shipped to North America customers and 3,411 units to international customers.

On Monday, Scientific Games announced plans to refinance a portion of its debt, by initiating a process to amend and extend its existing term loans, which stood at approximately US$3.2 billion at 4.75 percent. The firm intends to lower cash interest, extend maturities to 2024 and lower its cost of capital, it said.

Michael Quartieri, the firm’s chief financial officer, said in a statement included in Monday’s release: “Our focus on innovative new products, continuous process improvement and fiscal discipline has enabled us to grow operating income and cash flow, leading to a reduction in our net debt.”

He added: “This has resulted in our net debt leverage ratio at June 30, 2017 declining to 6.8 times twelve-month attributable EBITDA. With our strengthened performance, we are well positioned to further improve our capital structure and lower our cost of capital.”

Telsey Advisory Group LLC’s analyst David Katz said in a Monday memo: “Scientific Games continues to execute ahead of expectations from an operating perspective, which should position the company to accelerate its cash generation.”

He added: “Scientific Games has more going for it than the positive operating environment, as its new games are performing well and management has managed costs aggressively, which is generating stronger progress than we expected.”