Sci Games can deploy any ETGs in Macau: Mooberry 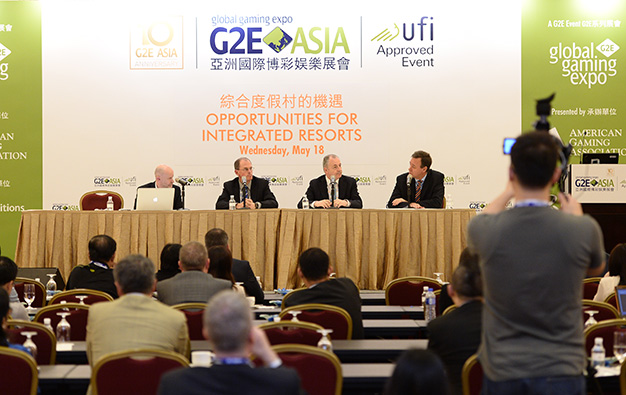 “The courts have ruled in our favour,” regarding the right to sell “any” electronic table game (ETG) in the Macau market, said Derik Mooberry, executive vice president and group chief executive of gaming at Scientific Games Corp. He was speaking at a conference panel at Global Gaming Expo (G2E) Asia 2016 on the future of electronic casino games. The session was moderated by GGRAsia.

“We feel we can deploy any electronic table product we like in this [the Macau] marketplace and have been told exactly that,” added Mr Mooberry.

U.S.-based SHFL Entertainment Inc – a unit of Scientific Games – makes multi-terminal electronic table game casino products featuring a live dealer. But when the firm had attempted to show such products at several Macau trade shows in previous years, Macau customs officials had ordered SHFL representatives to switch them off and cover them up, citing an injunction issued by a Macau court following a claim of patent infringement.

SHFL Entertainment (Asia) Ltd had been challenging via the Macau courts whether two patents registered in Macau by an entity called Natural Noble Ltd gave the latter firm rights over “all and any” products involving multiple terminals for electronic casino table games “that involve a human croupier”.

LT Game had been making use of the technology attributed to Natural Noble in order to market such a product in Macau and elsewhere under the name Live Multi Game.

The news of the dismissal of SHFL’s patent-related Macau lawsuit came days after Paradise Entertainment announced it had agreed to transfer all of its electronic table game technology, patents and other intellectual property to global gaming supplier International Game Technology Plc (IGT), with the exception of table game intellectual property used exclusively in Macau.

IGT International chief executive Walter Bugno, who was also on Wednesday’s conference panel, was asked why the intellectual property deal with LT Game had excluded rights to LT Game technology in Macau.

He said: “It was because LT Game has a very well-established position in this market [Macau]. It was not established in any other jurisdiction around the world. Hence we didn’t see we could add any value through the IGT distribution relationship that we have with customers in this market – that LT Game couldn’t [on its own].”

Scientific Games’ Mr Mooberry noted of his own firm’s position: “We’re open for business, and obviously in this market, you see it loud and clear when you come to our booth: we have all different variants, electronic [gaming] tables that we are not only showing at G2E Asia, but are marketing outside Macau.”

The session, was titled ‘CEO Perspectives: How Slot and Game Developers Change to Meet New Demand’ and included Trevor Croker, executive vice president global products and insights at Aristocrat Leisure Ltd. The panel also commented on what role the trend of supplier consolidation might have on product development, and why there hadn’t been more tie-ups between Western and Asian firms.

“In our sector, probably there weren’t many Asian organisations to consolidate. A lot of consolidation that has been occurring has been primarily driven through the U.S.,” said Mr Bugno. “There’s a lot of consolidation going on in the online space in Europe… there’s significantly more consolidation there than on gaming machines [producers]. I think in Asia, the options [for buyouts] have not been as evident.”

But the panelists agreed that as the market for gaming suppliers in Asia gradually matures, more companies in the industry in the region could be potential targets for merger and acquisition activity.

Mr Croker said that there were many more Asian equipment suppliers in recent years. “I don’t think it is the case of why it [consolidation in Asia] hasn’t happened. I think it’s a case of when it will happen,” Mr Croker said.